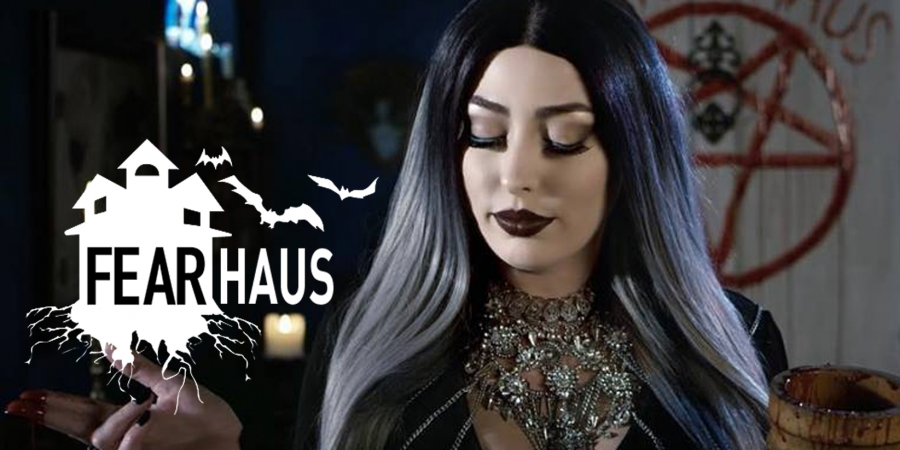 Is this series title new to your eyes and ears? Better late than never! The horror anthology series initially launched in 2015 with indie-horror personality Blair Bathory at the forefront. For the last year, the horror hostess has been hard at work with Drew Sawyer, producer and Moonshine Productions post-house owner in Atlanta, to execute the highly awaited return of the show.

The great news is we don’t have to wait much longer for the online premiere and it looks like we can expect a number of collaborations coming to light:

Last year, Sawyer and Bathory created their ‘fearmaker’ program by bringing in guest directors to conceptualize and produce wrap-arounds for the series. Currently Director Molly Coffee and the Canadian creative powerhouse Luchagore Productions, with Director Gigi Saul Guerrero at the helm, have created 6 episodes each.

With the continued objective of providing indie horror filmmakers the opportunity to screen and promote their films, FEAR HAUS gives viewers the exhilaration of a horror film festival from the comfort of their home. Stream the show on your television or other personal device and you will be greeted by the gothic beauty Blair Bathory whose charm and passion comes heavily influenced by horror hosts of the ‘80s and ‘90s.

“What happened to all the horror hosts? As a fan of scary movies I use to have so many options to catch up on my weekly dose of fear,” Blair Bathory disclosed to Horror Society in a previous press release. “The Crypt Keeper and its British cousin, Tales from the Darkside, and of course Elvira: Mistress of the Dark; to name a few. These characters have long since faded away, but with the rise in digital filmmaking and independent cinema there’s an influx of horror content.”

An influx of horror content there may be, but what are the view counts looking like for those indie films? Digital media becomes increasingly difficult to push when facing the likes of Facebook, YouTube, and Instagram algorithms. It’s with that challenge Bathory recognized the need for a source that viewers can rely on to be introduced to films that would have otherwise been difficult to come upon organically.

Creators supporting other creators? That’s what the horror community is all about, so keep FEAR HAUS on your radar! Get a slice of horror every Wednesday starting January 31st only at facebook.com/thefearhaus.