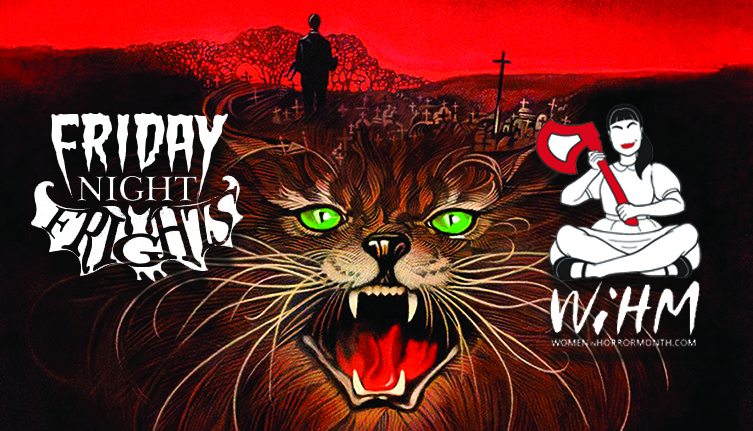 Friday Night Frights Tacoma returns for another evening of horrifying entertainment. For February’s Women In Horror Month (WiHM), the evening’s audience will enjoy Stephen King’s Pet Semetary following a series of giveaways by trivia questions (WiHM, Stephen King, or Pet Semetary related). The event’s featured artist this month is the lovely Meescha Dare who is co-hostess of Podcast Massacre!

SG: As a supporter of Women In Horror Month, would you say you’ve seen any differences in how the community has evolved?

AD: I’ve only recently become aware of the Women in Horror Month movement, as in the last 3 years. But despite that, I can say that I do believe in the last decade there has been a steady increase in the amount of female empowerment and movements to equalize the sexes in many different forms. However, I think the opinions of many males still point to a negative viewpoint that females cannot be “true horror fans,” and that they don’t appreciate “real horror movies.” There is much work to be done in this arena of thought.

SP: Ain’t that the truth… So, that being said, support from the public is obviously a big deal for indie filmmakers. Creators in general really. In your opinion, what’s the best way to go about showing support?

AD: First and foremost is to attend screenings of their films. Buy their DVD’s or Blu-Rays. That is the simplest step. Beyond that, is to help spread the word via social media and good old fashioned word of mouth. If you’re passionate about something, speak up about it!

SG: Yes! In your own way, you even show support for artists by collaborating with them for your FNF events. Like Meescha Dare who is your spotlight artist for Pet Semetary! Meescha is a staple ‘must-know’ artist within the Tacoma horror community much like how Pet Semetary is a staple film in the horror genre. How, or why, would you describe Pet Semetary as a staple horror movie?

AD: Pet Sematary is a staple in the horror genre as it deals with a multitude of human emotions such as the loss of a loved one, guilt, deception, insanity and the tampering of death from life. Stephen King not only wrote the novel, but the screenplay to the film, and had enough say in the filming to actually recreate the book accurately to film. Many find themselves subconsciously terrified after a viewing due to these factors. Not to mention, director Mary Lambert’s careful eye to detail of stunning shots of gore from emotion. She is able to get you to care for the characters with sound, acting and framing. A well-versed director to say the least.

Join your host Anthony Dluzak at the Blue Mouse Theatre in Tacoma, Washington this month to honor women in horror with this film directed by Mary Lambert!