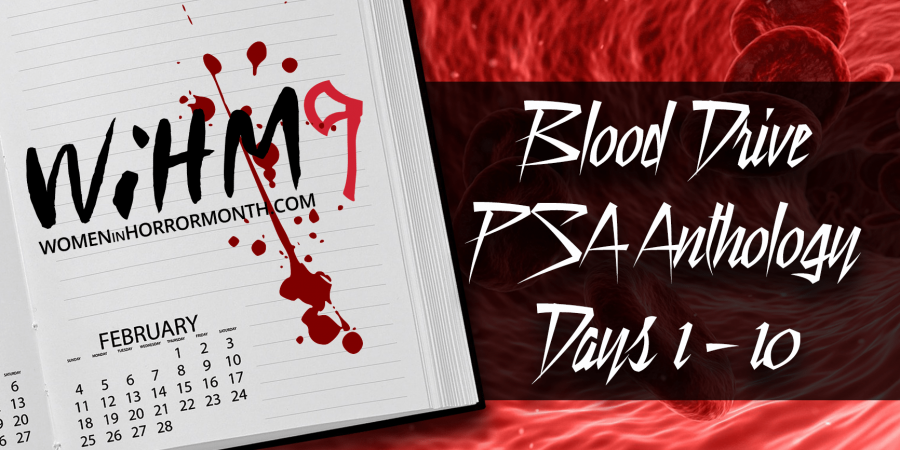 The Women in Horror Month Blood Drive PSA Anthology is the mostly-February advent calendar you should be following. Check out these killer horror shorts and click to tweet your favorites when you’re done! Not familiar with the movement? Read up on Women In Horror Month and the annual Blood Drive here.

DISCLAIMER: The content material that follows is not suitable for all audiences. Each film may or may not contain extreme gore, nudity, language, and more.

“I celebrate Women in horror month every month. Without the wonderful women of the horror genre, we would have no Frankenstein (thank you Mary Shelley). We would have no Creature from the Black Lagoon (thank you Milicent Patrick). And we would cease to exist. I think these days more than ever, we need to remind ourselves that each of us emerged bloody and crying from the womb of a brave and strong woman. It is my pleasure to be a part of this collection of short films that celebrates the wonderful women of Horror.” – Joe Magna
Primary Crew:
Writer/Director/Editor – Joe Magna
Cinematography/Music/Sound Design – Richard Trejo
Production Design – Alex Napiwocki
Cast:
Jill Evyn
Stephanie Gail Williams
Christina Westbrook
Noel Jason Scott as Harvey Winesnob

“I am grateful for the opportunity to be a part of this year’s Blood Drive campaign for several reasons. One of my favorite things about filmmaking is the collaborative nature of the art. I love meeting people, working with other amazing talents and bringing it all together to create something bigger than anyone of us. This project encouraged me to stretch my artistic imagination and to reach out to new people to help realize this vision, which is unlike any other project I have undertaken to this point in my career. I love that there are 30 PSAs being released — that we are a part of something much bigger. This is a wonderful chance to meet new artists and to see and support their work. Of course, most importantly, our entire team is thrilled to be supporting the cause of blood
donation. I have personally been the recipient of blood transfusions at three different points in my life. I do not know what would have happened had that blood not been available when I needed it. I want to express my gratitude to blood donors and to put a face to this cause. When you give blood, you are helping a real person – someone’s mother, someone’s sister or brother or baby… Although the need for donated blood can be greater during times of disaster, there are people who are counting on transfusions each and every day. We are honored to help spread the word and remind everyone how important it is to donate blood!” – Dayna Noffke
Crew:
Director – Dayna Noffke
Writer – Anthony Taylor
Director of Cinematography – Bryan Redding
Gaffer – Chase Yarbrough
Production Designer – Jessica Britton Parker
Digital FX Supervisor – Stacey Palmer
1st AD – Gabriela McNicoll
On Set Dresser – Derek Haygood
Key Beauty Makeup Artist – Beverly Ever Hegmon
Key SFX Makeup Artist – Luke Godfrey
Script Supervisor – Nahika Blanchet
Camera PA – Scott Mitchell
Set PA – Gilbert Moreno
Editor – Stacey Palmer
Colorist – John Petersen
Sound Design – Krista Berutti
Music Composer – Benjamin S. Hernandez and Paul Nassar
Re-Recording Engineer – Benjamin S. Hernandez
Cast:
Madeline Brumby
Viva Tolar
Joe Hart
Special Thanks to:
Shane Morton of Silver Scream FX Lab
Jen and Sylvia Soska
Lynne Hansen
Chris Ethridge

“The Soska Sisters are leading a charge for change. The Women in Horror Blood Drive is a lot more than just getting people to donate blood (which in itself is enough reason to take part) but they are also raising awareness and promoting equality, not only for women within the horror industry, but providing a voice for unknown filmmakers. This Blood Drive is about community, and expanding that community for the good of the industry – the fact it will may also save lives by getting people to donate blood? Well… the questions should be, how could we say no? #wearewiththesoskas” – Mark Miller & Christian Francis

“As a film-maker with an interest in horror, I see lots of blood and I’m always thinking of new ways to spill more. In fact, there are more ways than I can imagine – everyday we’re at risk of accident or emergency and our medical services are always in need of more blood. My husband has a rare blood type and, as much as I would sometimes be tempted to spill it, it is precious stuff and he donates it regularly. I bake him cookies for after – I’m not a monster! Blood donation is not something that many of us think of until the need is right in front of us. It’s important to be prepared and who better to remind an audience of that than us film-makers with blood on the brain! It’s an honour to be asked to contribute to this year’s Massive Blood Drive by utterly heroic Jen and Sylvia Soska, who for me have already shown what it means to ‘Be A Hero’.” – Aislinn Clarke

Written and Directed by:
Aislinn Clarke

This ‘Click to Tweet’ is currently under construction, but please support the filmmaker by tweeting @ and following @AislinnClarke.

“I was drawn to the WiHM blood drive for a variety of reasons. First on the list is that I’m a big fan of women subverting expectations in the horror genre, both behind and in front of the camera, so thanks to everyone’s favorite Twisted Twins, I’ve been aware of the blood drive / PSA anthology for years. Secondly, as a survivor of multiple broken bones / surgeries / hospital stays in the past, the blood drive holds a very special place in my heart. I’ve been reliant on the kindness of others in the past, so convincing me to return the favor isn’t hard to do!” – Lex Lybrand

“Every year, I look forward to participating in the Soska Sisters’ Massive Blood Drive PSA. I’ve been contributing for a few years now and it’s always a project that is fun to do, challenges me to be wildly creative AND also feels good to contribute to because I know it is for a great cause. Donating blood is extremely important and it is something more people need to do. I feel that creating these cool shorts gives the idea of donating blood a much needed facelift while also helping reach a different audience that might not respond to more “traditional” campaigns. I’m happy to do my part in raising awareness for blood donations by creating something fun and unique that I know will have a positive impact.” – Maude Michaud

“We’re passionate about giving blood because it’s a universal gift that almost anyone can give.  No matter where you’re from or how much money you make, your selfless donation can still make a difference.  We also give because we’d like to think others would do the same for us.  It’s so easy to distance ourselves from victims of natural disasters, gun violence, or traumatic accidents until we or someone we know becomes one of those victims.  If we’re all afraid to donate, or if we all assume someone else will fill the need, who’ll be there in our time of need?” – Sam Hawkins and Kim Pipkin

Written and Directed by:
Sam Hawkins and Kim Pipkin

“I’m participating in the annual PSA Blood Drive for Women in Horror Month because life can change at any moment; you never know when you’ll need a little help from a strange. If you can, please give blood at your local donation center or spread the word!” – Izzy Lee

Written and Directed by:
Izzy Lee

My Father, My Hero

“Someone, at some point, donated the blood that was used to save my life. I was diagnosed with Type 1 Diabetes at 27, and during the ensuing hospital stay I needed blood to save my life. Additionally, since 2011 I have undergone multiple major surgeries that required blood transfusions. Blood donations are a direct part of why I am alive, today. There’s not a hospital in the world that isn’t in need of blood and there are never enough people donating.
Because of blood donations I am able to be here with my partner, creating the art that we love. That is why we are involved in the Women in Horror Month Blood Drive PSA’s and why we believe it is so important to donate blood!” – Andrew Hass and Kynda Laufmann
Crew:
A Lost in the Woods Production
Written, Directed, and Edited By – Andrew Hass and Kynda Laufmann
Carnilux V.O. – Andrew Hass
Director of Photography – Seneca Smith
Makeup Effects By – Cassandra Carpenter
Carnilux Advert Designed By – Travis Legge
Props – Jessica Smith
Boom – Ouen Smith
Cast:
The Husband and Hero – Kiah Owen
The Happy Housewife – Mikayla Daniels
The Darling Daughter – Faythe Lloyd
The Terrifying Twins – Liam and Warren Daniels
The Meat – Stephen Lloyd
You might also like...
Share