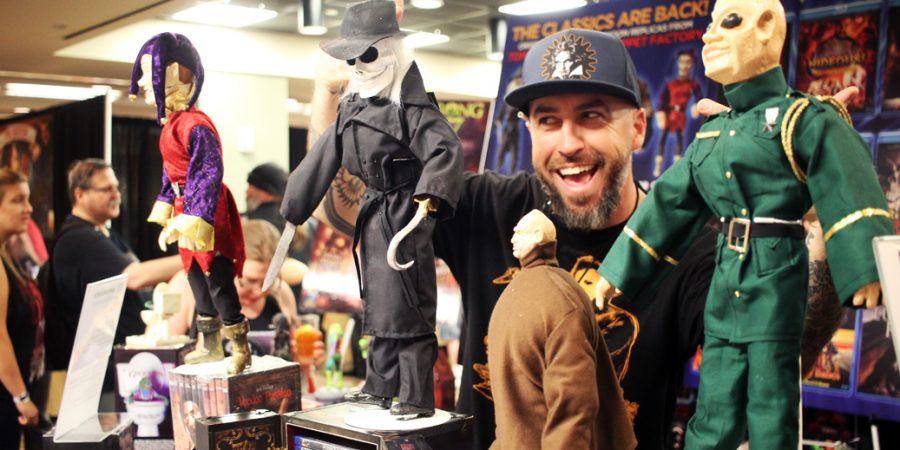 It’s only been a few weeks since Texas Frightmare Weekend 2018 drew to a close, sending attendees on their way home with autographs, goodies, and memories to look back on. As part of the pre-convention coverage, we asked attendees of the past and present what makes Texas Frightmare Weekend so special? But now we want to know the details that stuck with them from this year’s show.

The Superghoul asked members of the Texas Frightmare Weekend online community what were the most memorable moments and memories they’ll hold on to. This is what attendees had to say…

10. Been a diehard Saw fan and meeting majority of the main cast over the years since 2004 except him finally paid off with meeting the man himself. And attending the Q and A with the whole cast with him topped it off. – Chase Tumtum Menard

9. Waiting in line to meet Brad Dourif was exhausting I was there since the doors opened and waited and met him in the end and It was so worth the wait. He was an amazing person to meet and he was just so nice and listened to me as well as Don Mancini. Altogether it was an amazing experience, I’m so happy Texas Frightmare has them this year. This will forever be the best day of my life. – Lino Moreno

8. The look on Stephen Biro’s face when I gave him a 12 pack of beer. I didn’t get any pics of that. Just pics of me and the wife. – Bradley D. Lowe

7. Ron telling me and girlfriend to get a room while in line for Jasons photo op. – Nathan Starr

6. This little one named Cason (sp?) gave Freddy a hug and a high five was quite a highlight. – Trudie Jean O’Melia

5. The elevator conversations. I chatted with Simon Bamford about his shirt, got complimented by Clive’s partner, joked with Doug Bradley, and I’m sure I had a ride or 3 with other guests that I was oblivious to. Aside from the guests, I also had some really great, random conversations with pretty much everyone on the elevators. TFW (staff, guests, and attendees included) is like one big happy family. – Sheena Lovelace

4. Dressing as the addams family getting stopped constantly to get our pictures taken like we were celebrities, Tom savini said we looked cool and he also took a picture with us!!! – Kacey Robinson

3. So got off the elevator and almost died!!! Seriously!!! Rick Grimes was standing there …had to do a double take…swear this guy was spot on!!! Only had a second with him but got an amazing pic! He whispered in my ear (dont remember at all what he said lol) and gave me goosebumps…this guy omg….. – Dana Thomson

2. Nicholas Vince’s reaction when I showed him the Chatterer art piece my 15 year old had done. He took it and showed it off to his assistant, and the people in line. Then, kept pausing while signing it to admire it a bit more. – Breland Scott