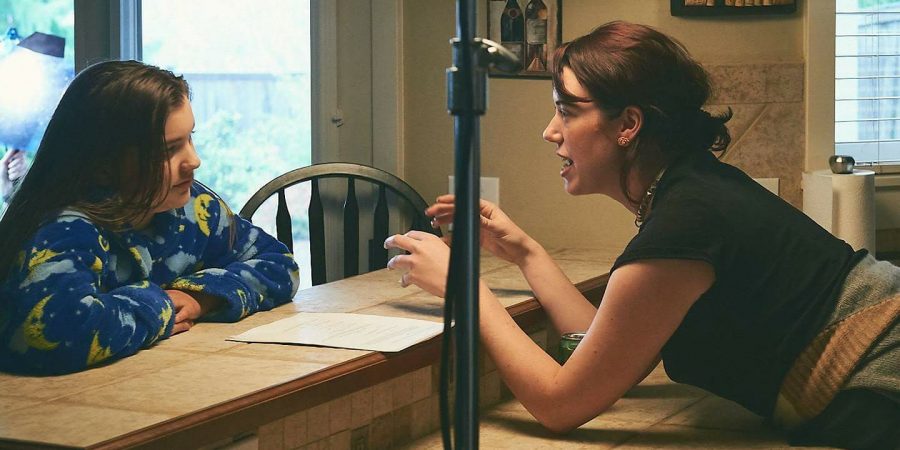 When it comes to LA + Seattle filmmaker, writer, and dancer Katherine Grace Murphy, she’s all in for creative risk taking.

At a young age, Katherine experienced a call to create. It began in elementary school when Katherine rallied her friends, siblings, and cousins to choreograph dances and put on plays for their parents and other adult family members present.

“Once my parents got a VHS recorder, I started making movies, editing as I shot, having my sister, friends and cousins act out various, silly scenes and showcasing them to family members,” Katherine shared. “I didn’t start getting into film as an adult until after college. I’ve always been a film lover and have been writing in various forms since middle school.”

From there, Katherine’s creative spark within her ignited an idea for what she said was intended to be a comic book.

“I told a friend (Cainan Martens, resident D.P. and central to the Don’t Do It! team) about it, who was in film school at the time. We set out to make our first short film ‘To Whom It May Concern,’ and I’ve been hooked on film ever since.”

One glance at Katherine’s website and it is apparent how much of herself is put into her work. Katherine, a ballet dancer with experience in the performing arts, incorporates much of her experience and knowledge into her films.

Reflecting on her training and knowledge impacting her filmmaking career, Katherine explained, “It impacts it [filmmaking] in many ways. I think having such a long history with theatre performance gave me a pretty good idea about the layers of behind-the-scenes work that a film requires, so I was never surprised by the time and resources it takes to make even a short, low-budget work.”

“As a director, my dance background helps immensely. From giving me a natural understanding of blocking and light stunt-work, to helping me connect actors to their breath and physical manifestations of their characters. Dance film is also something I’m starting to get more involved in, so that’s been really exciting and given me a new perspective about what is possible with film on-whole.”

If you take one look at Katherine’s film work on her website, you can see how far her creative range goes. Dance films, shorts, and of course our favorite…. horror films. For this filmmaker, horror was a medium waiting to be tapped into in her life. In middle school, she was partial to Dante’s Inferno as her favorite book, The Shining as her favorite movie, and has generally been intrigued and drawn in to horrific aspects of the human mind and history.

“Horror as a medium didn’t really come into play until we came up for the concept of Don’t Do It!, but the more horrific parts of the human experience have always been present in my work.”

Before we get ahead of ourselves, you need to hear about Don’t Do It!

Don’t Do It! is a web series of “would-be horror shorts” as Katherine describes it. It’s the fruition of an exercise that utilizes not just the predictable, but fresh spins on classic horror movie tropes that ultimately provide viewers an entertaining film experience.

How did this project come to be?

“To Whom it May Concern is an 18 minute short that took us three years to make; so, we really wanted to make something that we could see a finished product for quicker. Some of the crew from To Whom and I were hanging out and we just started riffing off the idea of horror protagonists doing the smart thing in a horror movie for once.”

By the end of the conversation, Katherine and her colleagues had 20 episode ideas for Don’t Do It! and four people ready to get started. It became nine short films that were created from concept to final cut in six months with many thanks to a total of 30 cast and crew members and a budget that took care of actor pay, meals, and materials and props needed for the set.

“It was a huge community effort,” Katherine explained. “And the talented people we got to work with, and what we got accomplished, was electrifying. After the fact, the key crew members of Don’t Do It! have referred to the experience as our ‘film school’ – even though most had actually graduated from film school previously.”

What a milestone that was for Katherine, and with every milestone comes influence and development which rings especially true for creators of all types.

“Every time I finish a project I immediately start materializing lessons and process changes that I want to keep in mind for next time, so in that way, every project has been a milestone. Seeing my films being shown at festivals has really helped me understand what people respond to. One lesson I am constantly learning is to not be afraid of being too dark or absurd. Whenever I’m about to put something out, that is about the darker and more depressing aspects of life, I get anxious and insecure about how it will be received. What I’ve seen time and time again is that not only is there an audience for works with such themes, but in many cases they have been the most well-received episodes and have stirred up bigger laughs and grander reactions than works in which the subject matter is a bit safer-feeling to create. Plus, none of us like perfect people, we all like deeply flawed characters that we can root for or relate to.”

Katherine Grace Murphy’s trailblazing film and writing career continues to impress with her newest project Dead Oasis recently making a debut at the Port Orchard Film Festival, and her team’s 48-hour film The Asylum being accepted into 3 festivals and a distribution offer from 13Horror.com. You can check out the behind-the-scenes story on Katherine’s blog and/or keep tabs on these projects and future projects by following her social media pages: Facebook | Twitter | Instagram | Patreon

Word has it Katherine and her team are discussing possible one-off episodes, or even a second season of Don’t Do It! Be sure to subscribe to their YouTube channel to never miss a video: Don’t Do It! YouTube