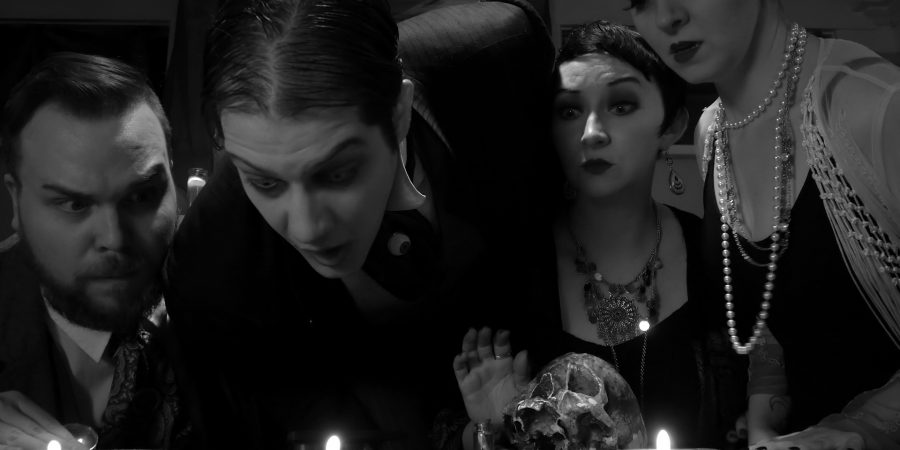 Last we shared with you the news of Tristan Risk’s directorial debut, the horror-comedy short ‘Parlour Tricks’ was in the middle of post-production. We’re happy to report the team at House of Hiss, in partnership with Bad Cookie Pictures, has wrapped post-production and are one step closer to sharing the short film with the world!

Until then, we offer you a glimpse* at the short film in the form of a bite sized review:

Gidget Gravedigger, Emma Eldritch, and Tyler Nicol star as three poor souls down in their luck with the recent passing of their beloved aunt. Unlike the short film itself, their lives and present situation are not so black and white, sending the three to seek assistance from a medium whose role is assumed by Sean Covernton.

No spoilers, please. It’s a waste of good film watching.

Much agreed, but what we can share with you is the short has much to offer. Not only does the group summon an otherworldly guest, but they summon hilarity for even the most macabre of souls to enjoy. Between Emma Eldritch’s comically distressed performance and Sean Covernton’s theatrical voice containing hints of universally loved Vincent Price, the cast presents an easily light-hearted piece to add to that list of shorts and videos to show your best friends. (We all have one of those, right?)

All-in-all, Tristan Risk delivered with an impressionable force in her directorial debut and we asked her to weigh in on the inspiration behind the short.

“I am such a sucker for comedy. I’m like a Greek play – there has to be comedy and tragedy (ahem, horror) in my work. I’ve always focused heavily on the horror with a bit of the funny stuff in the mix with what I’ve done,” Tristan spoke on her comedy influences. “I also grew up with a mix of Addams Family and Hilarious House Of Frightenstein, but as well a healthy dose of British Comedy where I might mention Black Adder, The Young Ones, and Red Dwarf. I totally cite a Munsters/Addams/Scooby Doo vibe to this. I’m happy to do a bit of something fun and silly to get started with.”

“I was spoiled by a talented cast and rock-solid crew. They were so wonderful to work with and brought the vision to life. I was so happy with the result and it’d not been anything were it not for them. It makes me want to repeat the experience.”

As of right now, dates are currently being determined for screenings of Parlour Tricks. Subscribe to e-mail updates from TheSuperghoul.com so you don’t miss the screening dates as they release!