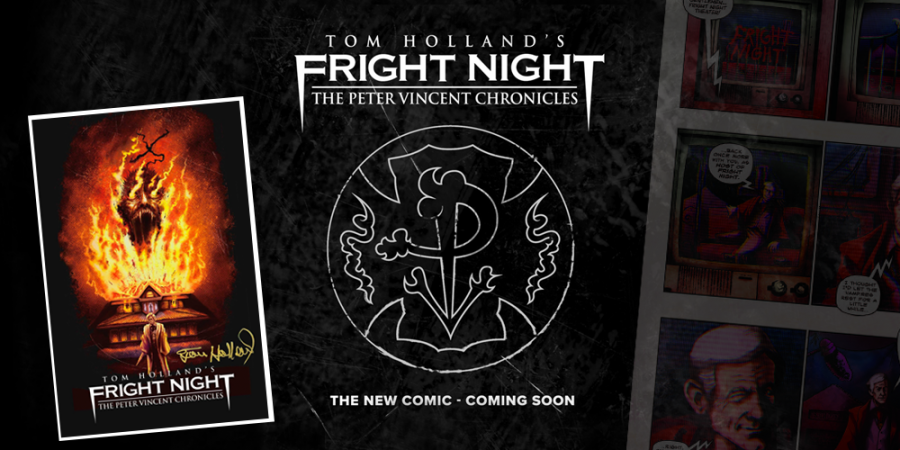 Tom Holland’s Terror Time web store is attracting traffic with news of Fright Night: The Peter Vincent Chronicles, Issue 0, which is a 24-page original comic book based on a story by Tom Holland. The comic storyline will immediately follow the events of the first Fright Night film and will set precedent for the franchise continuing a bright future in the comic book industry.

“It’s all I could hope for. A great continuation of the original,” said Master of Horror, and Fright Night’s writer/director Tom Holland. “Roddy would be proud to know his creation was continuing his journey in such high (and bloody) style. Ben Meares’s story is a winner and Riley Schmitz’s artwork captures the Fright Night experience for today’s fans. Onward, with The Peter Vincent Chronicles!”

Even more exciting, Terror Time is also offering a limited edition Deluxe Edition package which will contain the following:

The last two items included in the limited edition Deluxe Edition package are taken directly from the pages of the highly anticipated comic book.

With a resurgence of ’80s horror genre works being revisited through film and comics, there’s opportunity for expansion and both Ben Meares and Riley Schmitz are all-in.

“Fright Night is, for a very good reason, a beloved film within the horror community,” writer and editor Ben Meares said. “I believe a huge contributor to its staying power is the character of Peter Vincent. My goal here was to delve deeper into Peter as a character, and present him with a fresh set of challenges, personal and supernatural, to face off against. Being able to do so with the blessing from the film’s creator is quite simply a dream come true.”

“As a huge fan of the movie I made it my mission to capture its feel in comic book form, while still trying something new,” artist Riley Schmitz said. “I’m thrilled for this project and truly believe fans will enjoy it.”

Fright Night: The Peter Vincent Chronicles Issue 0 launched pre-orders on Monday, July 30th and the comic will be available for order on Friday, August 3rd, exclusively from www.terrortime.shop.