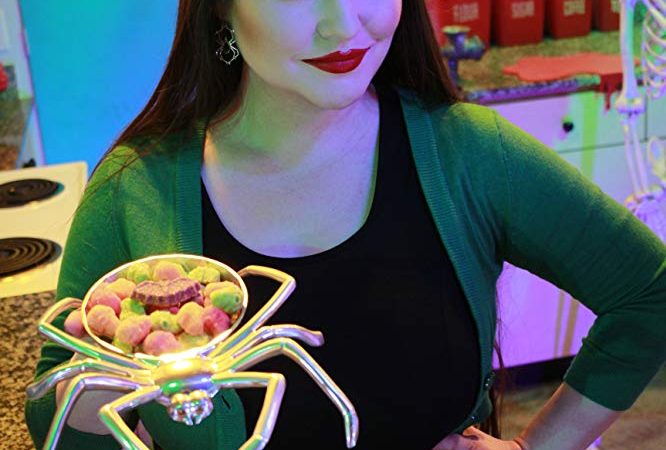 In the last 48 hours, a petition launched via Change.org by ‘Paulie Cadavers’ calling for Shudder, an AMC owned horror streaming service, to pick up The Homicidal Homemaker.

Being a niche subscription on demand service providing a range of horror, thriller, and supernatural titles, its no wonder why The Homicidal Homemaker is being pitched to the widely popular Shudder.

The online series, which is self-produced by the hostess and creepy cool confectionist Kaci Hansen, showcases recipes for ghoulish treats inspired by films, movies, and more within the horror genre. Some examples include Marshmallow Cheesecake inspired by The Stuff, ‘Cinna-bite’ Brownies which uses Lament Configuration panel designs from Clive Barker’s Hellraiser, and Soul Pizza which draws inspiration from A Nightmare on Elm Street.

The Homicidal Homemaker is the best show on YouTube right now, and it is created by a talented young woman who funds it out of her own pocket. With Netflix recently making an announcement that they are producing their own horror baking show, it is time for us, the fans, to step in and help Kaci (THE ORIGINAL!) get the recognition she deserves!!!

With the recent explosive success of Joe Bob’s Drive-In Theater on Shudder, it is so obvious that fans will turn up and support the things that they want to see. Netflix does not need your help. The small creators do!!!

Kaci started her horror-meets-home-economics website years ago, and was the first of its kind. Since then, other bloggers and YouTubers have been inspired by her work. It is time for Kaci to finally get the recognition she has worked so hard for.

Shudder, the ball is in your court. Let’s make it happen for Kaci! She is one of the hardest working women filmmakers in horror.

So, what do you think? Leave a comment with other YouTube titles and horror icons you think deserve recognition by being added to Shudder. To sign the petition to get Kaci and The Homicidal Homemaker on Shudder, click here.