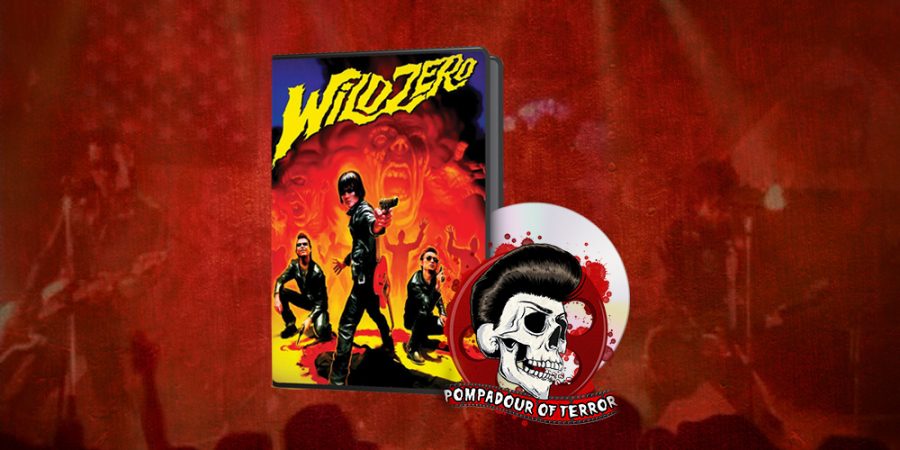 Okay, kiddies… we’re starting this off with one of my all time faves.

I’ve got a question for you:
What do Japan’s answer to The Ramones, a pompadour clad superfan, a girl with a dark secret, three losers on vacation, an arms dealing supermodel and a posh pill popping club owner in leather booty shorts all have in common? They’re all ingredients to the absolute madness that is the 1999 cult classic “WILD ZERO.” If you’re a fan of gore, Asian cult flicks or just weird cinema this is a movie you should definitely see. I first saw it at the 2000 Seattle International Film Festival. The audience was nothing but Japanese school girls and gutter punks… that about sums up this movie right there. 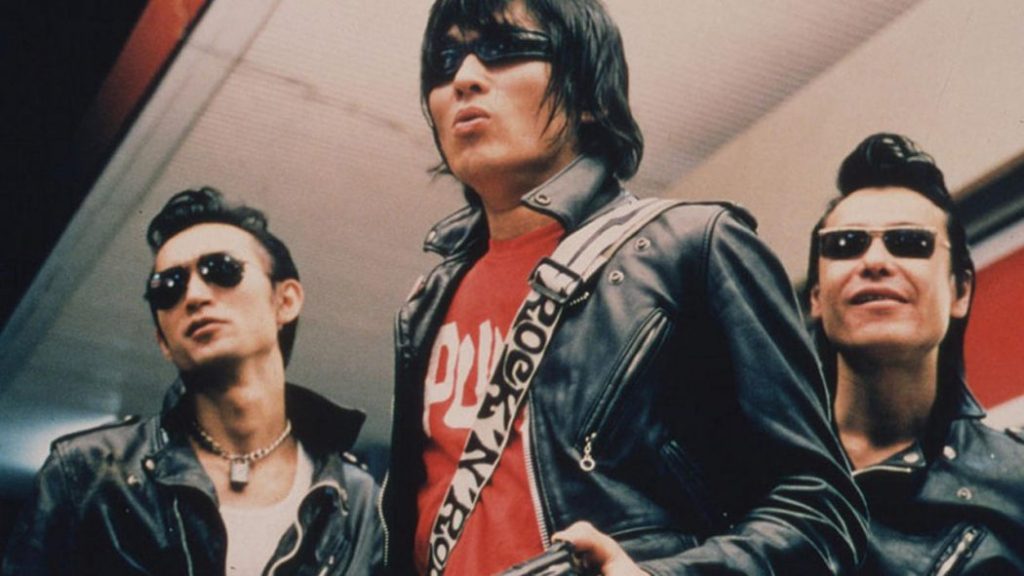 Now if you’ve never heard of this movie, you’re probably not alone. It’s the only feature film that director Tetsuro Takeuchi ever did. And while he’s mostly known for music videos kin Japan, his first jump into film proved to be a difficult one. Though short-lived, his mark on the cult movie scene was definitely made. He takes obvious influences from masters like Takashi Miike, Ryu Murakami, Quentin Tarantino and George Romero, mixes it all up on a bowl, sprinkles a dash of Benny Hill and a pinch of Hanna-Barbera on top and you have the self-proclaimed “Rock ‘n’ Roll JET-Movie” we’re reviewing today. 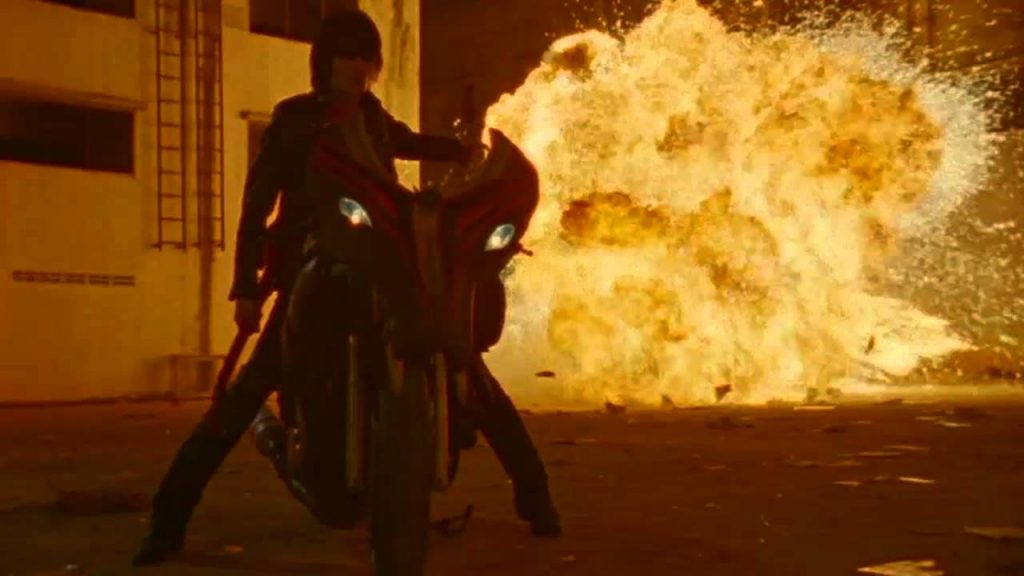 We start with a “Mars Attacks” style scene of alien saucers coming towards earth. But little explanation of why… but that’s not why the audience is here. This movie’s selling point is obviously it’s built-in fan base for the band Guitar Wolf; a three piece Japanese psycho-billy punk band… who actually play themselves in the movie. And while they have a very integral and important part in the story, the main character is Ace; a die-hard Guitar Wolf superfan (played by Masashi Endo). While attending a punk show outside of Asahi, Ace is coming back from the bathroom where he passes by the door to the back office of the club’s eccentric Prince-Valiant haircut donning owner, Captain (Makoto Inamiya) who is having a pay-dispute-turned-Mexican-standoff with Guitar Wolf (it’s important to make a quick distinction here… Guitar Wolf is the band name as well as the name of the lead singer; the others are Bass Wolf and Drum Wolf; so the name can refer to either the band or the singer). Guns drawn and trigger fingers itchy, Ace bursts in to come to the aid of his favorite band, takes one on the chin and distracts Captain and his goons long enough for Guitar Wolf to get the upper hand. He shoots off a few of Captain fingers as well as explodes one of his goons’ heads… the first of MANY exploding heads in this film. With Captain subdued, Ace lies on the floor in a daze. To thank him for saving his life, Guitar Wolf then cuts the top of his own hand as well as Ace’s and presses the bloody cuts together… forever bonding them as Blood Brothers. He also gives Ace a whistle he can use if he’s ever in trouble and needs help (PLOT DEVICE!!!). They all disperse and leave Captain downing pain pills and plotting revenge.

There are a lot of elements in this film… so bear with me.

That night reports come in of a meteor hitting outside of Asahi, but it’s so underplayed you almost don’t notice it. And apparently, neither do any of the main cast of characters.

We are then introduced to Tobio, a girl who seems to scare off every guy she comes into contact with. She gets stranded at a remote seemingly abandoned gas station by her latest “date”, where she meets Ace who is fresh off his night out and encounter with Guitar Wolf. They start talking and it’s love at first sight… but Ace has to keep moving on. “Ace is number one… That means I’m the number one man.” He’s obviously a badass…

Scene change! We are then introduced to Masao, Hanako and Toshi (played by the Steve Buscemi of Japan, Yoshiyuki Morishita… the funny looking guy who gets dispatched at the bar by Gogo Yubari in Kill Bill Vol. 1). While on a random trip into the country they also stop at the gas station… and Masao attempts to rob it. This causes Tobio to faint. Masao freaks out and he, along with the other two, take off without a cent from the “robbery.” They head out to the forest to hide in shame.

Another scene change and we meet a spurned supermodel-esque arms dealer, impatiently waiting on her buyer in the outskirts of Asahi. Her clients are on route from a yakuza boss’ wedding… but they are sidetracked. And this is where things really take off…

ZOMBIES!!! Zombies EVERYWHERE. A hard left turn and we got ourselves a movie.

Ace runs into them along the road eating a lone driver, Toshi and Hanako find Masao being eaten from the brains down, they surround Tobio at the gas station, they attack the yakuza limo, and even sneak into the model-turned-arms-dealer’s house while she’s showering. From here it becomes a zombie survival flick with our main cast quickly coming together in small groups, fighting their way through hordes of blue “Dawn of the Dead style” zombies, exploding heads along the way. Ace is trying to save Tobio, Guitar Wolf is trying to reunite with Ace to repay his blood oath and they’re all being pursued by a well-armed Captain who is hell-bent on revenge and itching to settle the decades long score between him and Guitar Wolf.

If I go into much more of the specifics, I’m afraid I’ll ruin the wacky and wild fun. But let these bullet points entice you to track this thing down and give it a watch: 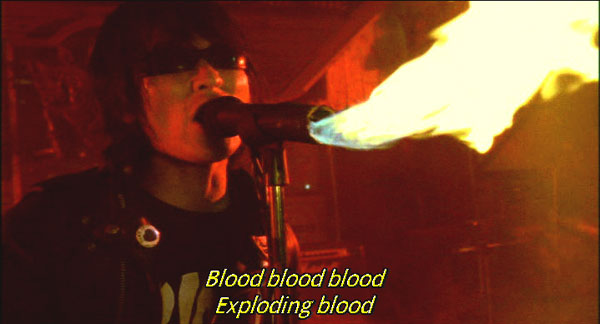 And if all this isn’t enough, there’s the most important component: a drinking game built RIGHT INTO the DVD. That’s right… a little beer icon pops up whenever you have to drink (I don’t recommend using hard liquor – I went through 2 and a half giant Kirin Ichiban bottles in the tight running time of 98 minutes which even for a seasoned drinker like me was a chore).

More fun things to look for: It was all filmed on a shoe-string budget in Thailand. All the signs (from road signs to names of buildings, etc) are in Thai. So the producers set up really janky hand-written Japanese signs over the top of them to make it seem like it’s shot in the Japanese countryside. On a few occasions though, you can catch a glimpse of a sign written in Thai. Just another little thing for movie nerds like me to find utterly charming about this little gem.

In summation, the music is loud, the effects are bad, the story is ludacris, the acting is goofy as all hell and the characters are completely unbelievable absurd. Everything you want in a Japanese Midnight Movie.

I give it 4.5 Popcorn-Munchin’ Pompadour Skulls and HIGHLY recommend you check it out.

Available on DVD from Synapse Films and, if you’re a real hardcore nerd who only likes things on VHS, you can probably still find it on there too. An actual tape copy was my first version of this film, so I know they exist. Happy hunting, weirdos!