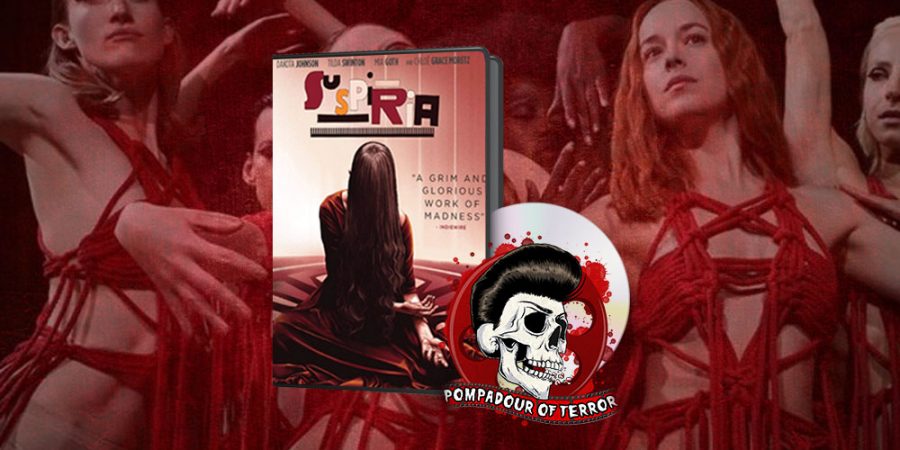 Okay. New “Suspiria”… It should be noted that I watched this on a dreary day so that might influence some of my feelings about this film. I’m going to start this off my making a blanket statement. And this will inform you to read further or dismiss my review and interpretation of this film… whether you’ve seen it or not.

I liked it. I really did. And, for what it is, I will defend it.

That being said, let’s first discuss its predecessor, the Dario Argento classic. I would never attempt to take anything away from it. I would never think of disparaging it in any way. It is a timeless piece of art and endlessly influential to the world of horror and the cinematic world at large. It is a blunt and beautiful assault on the senses. And it is most certainly a product of its time. This is something we must keep in mind when discussing the new film, and all remakes and reimaginings in general.

The new movie is NOT Suspiria. It’s just not.

But that is a GOOD thing. And we should be happy for it.

When a filmmaker decides to take on a remake, especially one of such an influential and beloved film, they have a decision to make… Do they blaze a completely new trail OR do they religiously follow the structure and emotional content of the previous version.

Luca Guadangino did neither. As someone who was obviously inspired by the original Suspiria (and more than likely all of Argento’s work) he chose the road less travelled. He boiled down the story to a core concept and built it back up with a whole new aesthetic… and did it with all the care, detail and love someone in his position should be expected to. The two movies should not be the same. Van Sant did that with Psycho and it was a trainwreck. A lazy abomination written off as an homage.

THIS is an actual homage film.

The story of Suspiria (at its core) is simple: A “pure” young girl comes to a european dance school from the US and finds herself entangled in a coven of witches attempting to prolong the life of their leader and unwittingly brings an end to her reign.

And that is still very much intact. Like all things that are rebuilt from the ground up, there are always removal of the old and replacement with updated concepts. Careful… there be spoilers ahead.

The most apparent difference between the movies is that the original is visceral and overt. It bombards you with color, pattern and sound. Argento wanted the audience to feel so out of sorts as to put you more into the position of Suzy. It was a bold choice and the defining element of the entire film. It’s also why people love it so much. 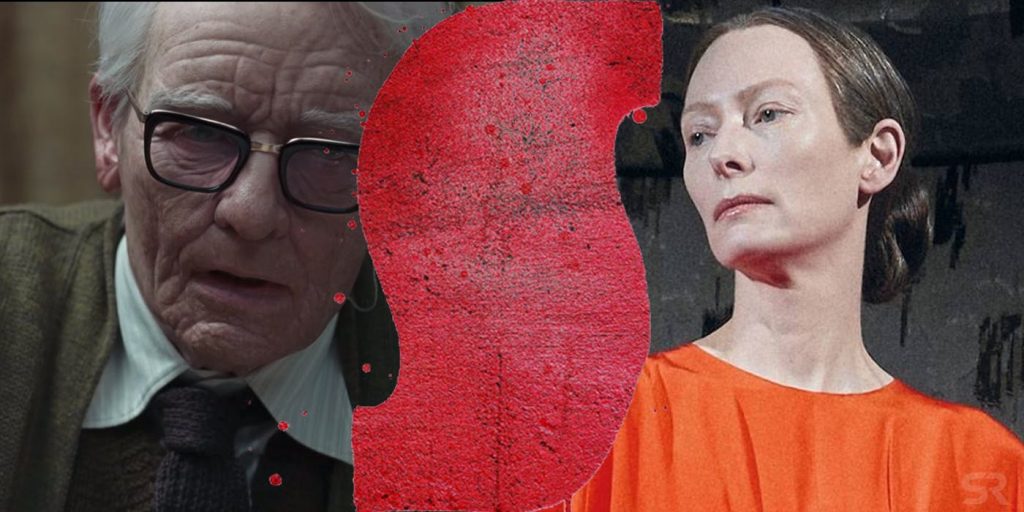 The new version does not take that approach. It is a slow, cold creep. And it works mostly because of the era in which it takes place: politically charged late 70’s Berlin. It is put into a much more historical context and takes great strides to keep the viewer grounded in the dank, freezing, and dreary world which still desperately clings to an era of post-Nazism rebirth and is living in a burned out shell of its former glory. It echoes the desperation of the witches in the coven… and Luca takes great care in painting the scenery with German expressionism. It feels very real. Much like Atomic Blonde, steps were taken to recreate the artistic aesthetic of the era and make it like another character.

And I’m glad for it. He still hints at specific things that were so impactful about Argento’s original vision: set design, patterns, music cues and a lot of the camera work. But it’s all toned WAAAAAY down. But, again, this is a good thing. He doesn’t want to make a copy of the original. And he doesn’t want to try to obliterate it from our memories. It’s true homage, and I could feel the care and love he had for the original. It’s a tight line to walk… and I feel he does it pretty well.

He removed key elements though. And I think that could be a HUGE point of contention for many fans of the original. None of the deaths are the same… no dog or blind piano player, no skylight hanging, no room full of razor wire, no big mute brute, no old lady and weird blonde kid. And I’m glad he didn’t replicate them… because not only were those more in line with horror of 1977, but they were already done. And done to PERFECTION by the genius of Argento, who knew how to cut an audience to the bone as well as what would terrify an audience of the late 70’s.

The new deaths are unique and fantastic. And the characters are defined with new sensibilities. And Luca does accomplish something that I wish Argento would have in the original: he shows the witches truly as a coven. Even though both movies had two factions and obvious dissent within the ranks, the coven in the original did not have the sense of comradery that the new one does. A coven’s strength comes from the sisterhood it is built upon. And the new version really highlights this. And, again, not saying it’s a better movie… just different but with a similarly true core. And this is something I didn’t know I would have liked until I got it.

The element of dance is also much more highlighted in this one and it explores the connection between the power of ritual and how it connects to the power of witches. It, like the music or color of the original, is very much a character all its own. 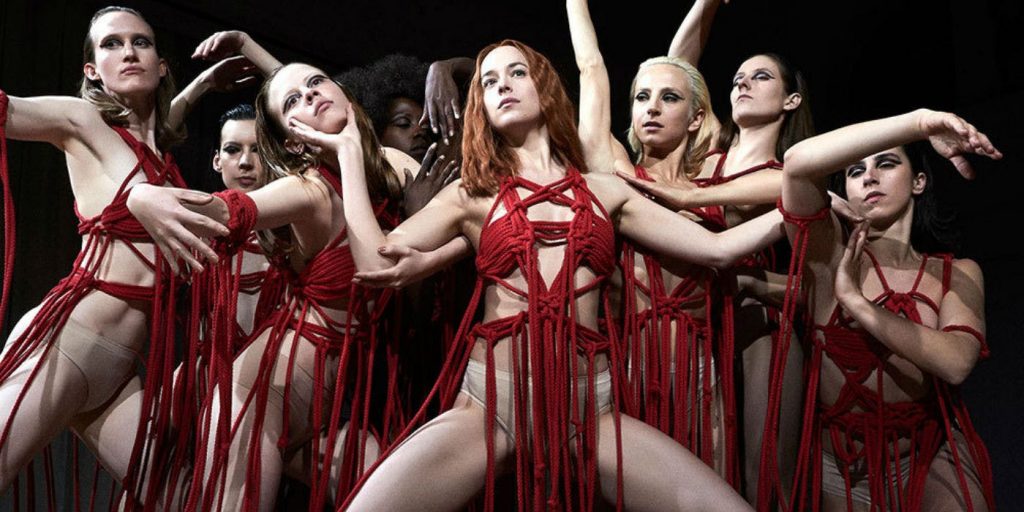 And, finally, the biggest thing that differs between the two is the acting. Much more care was put into casting actors who could hold the story with emotional content. And while I’ve never seen a movie in which I liked Dakota Johnson, my mind about her has now been changed. She fits the bill physically, but I was surprised to find that she had the quiet intensity to pull off the character the story needed. She is also surrounded by a pool of talented performers who also have the look and tone that makes it an engrossing experience to watch.

Which brings us to the element that was absolutely no surprise… Tilda Swinton. Quite possibly one of the most talented actors of our era, the range and grace she is known for is no short supply here. She plays two roles to perfection. The character she plays was more of a secondary character in the original but bringing her more to the forefront was a bold choice that pays off as far as I’m concerned.

Now, I know it seems as if I’ve gushed about this film for a long time… and for good reason… because I really liked it. But like all things, it is not perfect. There were a few choices Luca made that were a bit off putting. And while they didn’t ruin the experience for me, my kind keeps going back to them and wishing they had been different.

There is a running storyline with a doctor character who is mostly there to bear witness to the events of the film, very much the way that the audience does. He is also there to bring out the benevolent nature of one faction of the coven and highlight the malevolent nature of the other faction. For what it’s worth… I just don’t think he was needed. Maybe in small supply, but not nearly as much as he was. Now, he was being played by Tilda Swinton and while the acting portion was impressive, that’s about all that was impressive about him. His presence muddles and confuses the otherwise solid trajectory of the film and pads the running time by at least 15-20 minutes. I understand why he was there, I just didn’t think the story needed him.

And the final scene feels phoned in. I can only think that Luca did this also as an homage to the sensory overload the original had in spades, but it comes off as lazy and disorienting in all the wrong ways. The care and tightness of the camera work throughout the bulk of the film is obliterated by a washed out, clunky slo-mo scene that just doesn’t fit one iota. It felt like Luca carefully worked all the way up to the most important scene and then threw the reins to a film student. And like the doctor character, I understand what he was going for, I just think that it was a gross misstep that temporarily sullies the otherwise beautiful tone and pacing of the film.

For what it’s worth, that’s my take on it. I know it was long as hell, but there was just a lot of ground to cover and I needed to make one point very clear: I love the original. And this is not it. But that’s not a bad thing.

For my money, the mark of true homage is not wanting to recreate the original with slightly new ingredients (i.e. modern actors), but taking the core of the original and building a new and unique vision with all the care and love you can as to not despair the original. Copying is for hacks. Blatant remaking is lazy and boring. Giving us something new with a common thematic through line of a story that ignited an artistic fire within you? That’s real homage.

I give it 4 Popcorn Munchin’ Pompadour Skulls. Worth checking out. Available on Amazon Prime or Redbox.