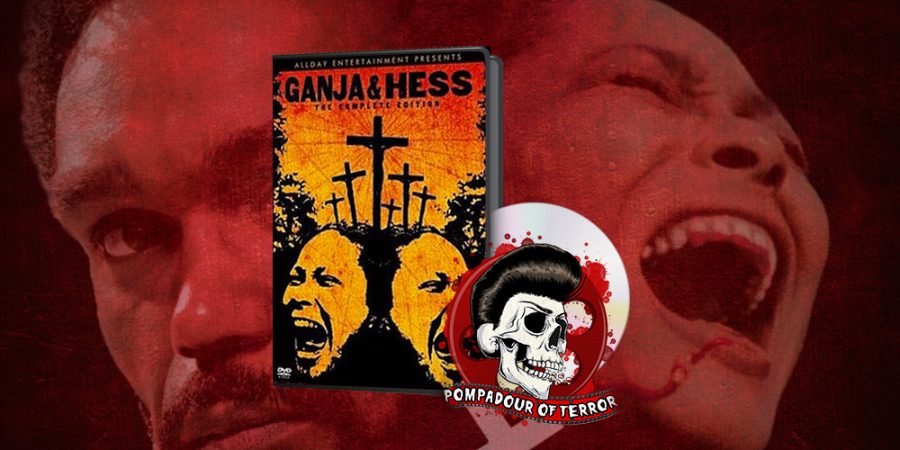 There are particular films that many of us have never seen, or even heard of. But they were the first of their kind… and their influence cannot be denied. So, in many ways, we HAVE seen them. Just not in their initial incarnation, but through those larger more popularized films that were born out of the ideas and aesthetics of its predecessors.

One such film is the 1973 indie Ganja & Hess, written and directed by Bill Gunn, who also plays an integral character in the first act. While Gunn does not have a huge directing or writing career, his work is that of an auteur… misunderstood and dismissed in his time only to be found by like-minded artists who would use his work as the building blocks of their own work. And, honestly, I can see why in many ways. The film is the very definition of a slow burn. If your definition of horror is jump-scares and gore, then this isn’t your thing. It is much more psychological. And while the premise seems like well-worn territory to modern eyes, at the time this was made it was beautifully unique. Knowing where the things we love come from is an important component of honoring them. And being an African American driven, acted, written, directed and produced film in an era where the only home for indies in the black community were exploitation films (which this eventually was sold as under a barrage of different titles just so it could get on screens) is an achievement in and of itself. 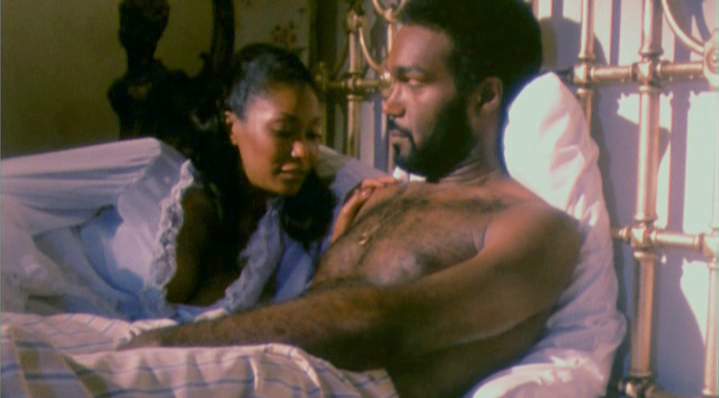 I’ll admit, it’s artsy. Like, REALLY artsy. At times, a bit TOO artsy. But it’s all part of its charm and you’ve got to take the good with the bad… because the story here is worth it.

Dr. Hess Green (Night of the Living Dead leading man Duane Jones) is an affluent and respected man. He has risen to high society, but inside he is bored and tortured. But his life takes a hard turn when his friend and assistant, George Meda (played by writer/director Bill Gunn), in the midst of a psychotic episode, stabs him with an ancient bone knife used in African rituals. Coming to grips with what he has done, Meda commits suicide… but rather than die from the attack, Dr. Green awakens to find his wounds have miraculously healed. He is also now consumed with a thirst for blood. Instantly, the trifles of daily life take a backseat to his new obsession. Feeding on prostitutes, he slowly becomes more disconnected from reality and keeps himself locked away in solitude.

That is until he meets Meda’s estranged wife, Ganja (hypnotically played by Marlene Clark). A “boss-bitch” of the highest order, Ganja slowly realizes the truth about Hess. Rather than be horrified and turn away, she realizes the power he has and embraces him. This pleasantly surprises Hess and existence no longer seems so pointless.

Devoting her life to him, she is also stabbed by the knife and they walk together through life… immortal and hungry. 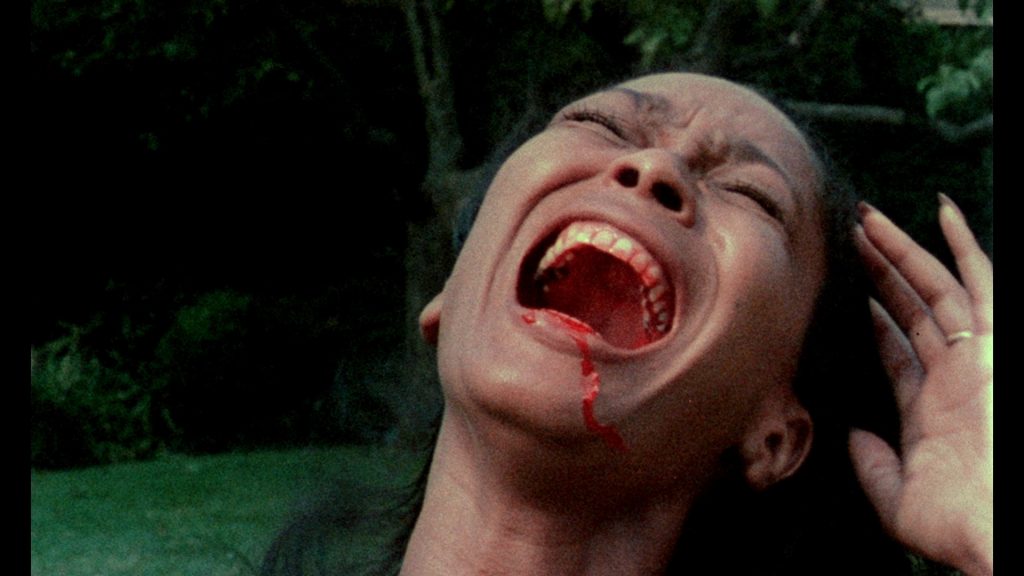 Now, this all sounds like stories we’ve heard before. And it is. But this is the impetus for it all. And while the movie itself takes influence from horror before it (the classics White Zombie and Dracula starring Bela Lugosi in particular) it weaves a tapestry of sights and sounds completely unique and deviates from all black cinema of the era. It has a special grittiness, mostly due to the film quality (which I can appreciate was not cleaned up for streaming) but also from its use of light and shadow. These elements not only play a huge role in the look and feel of the film, but eventually become part of the very story itself, expressing connections to duality in love and hate, life and death, and the balance between them.

Gunn’s direction of many scenes feels like a fever dream. He uses the camera to literally put the audience at unease and gives you a direct connection with the mindset of the characters. The use of light and shadow along with the blocking makes many of the scenes feel like they could be standalone paintings or photographs… each conveying an emotion in a single shot. 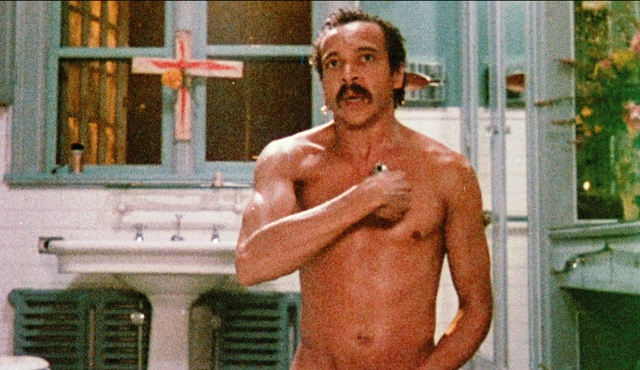 The performances are a joy to watch. If you think Duane Jones was intense in Night of the Living Dead, he really gets his acting chops out in this one. You can almost taste the desperation as it goes on, and his connection to a Dracula-like archetype could easily come off and forced or campy, but he does it with an elegance and smoothness that cannot be denied. And as good as his performance is, it is paled in comparison to Marlene Clark. She commands each and every frame she is in. She’s beautiful and bold. Her soliloquy towards the middle of the film is captivating and it gives you need to know about who she is and what she is willing to do to survive.

As I said before, this film was obviously influential to many horror classics that came after it. Most notably Tony Scott’s The Hunger, Jim Jarmusch’s Only Lovers Left Alive and Spike Lee’s Da Sweet Blood of Jesus, which was a legitimate remake of Ganja & Hess, even crediting Gunn as a screenwriter. The pace is something that people like Tarantino have utilized in their work and much of the slow burn tone and panning shots are echoed in movies like The Omen, The Changeling and Eyes Wide Shut. But what truly sets this movie apart is its perspective of the African American experience when it comes to wealth, society and especially religion. The connections and the evolution between the tribal rites of Africa and the Caribbean to the Christian and Baptist faiths of the era are the through-line for this, and all the emotional dichotomy is brings up between feelings of guilt and remorse vs. self preservation and pure unadulterated human urges.

The story is heavily pessimistic as well, but it works for it. Everyone is broken, everyone is tainted and no one can be redeemed. These are the struggles that Hess is tormented by, and Ganja lovingly embraces. These are the existential issues that were overlooked in the black community in film at the time. In an era where the standard portrayals are Black Caesar, Shaft, Superfly and Dolemite, this film stands out and raises the bar for what could (and should) be done. It paved the way for movies like Def by Temptation, Sugar Hill and eventually Jordan Peele’s Get Out and Us.

I personally had never heard of it until I saw the Shudder documentary Horror Noire about the black experience as it relates to the horror genre. And I had seen parts of Da Sweet Blood of Jesus but had no idea it was a remake. Honestly, I didn’t care much for the remake, even without knowing about the original. But it’s there in case this era of film making and the production value aren’t your cup of tea. So if your sensibilities require a more modern take, check it out… but for my money, the story and tone of the movie fit so much better with the original version.

If you’re a fan of horror history this should be one to see. For its contribution to the genre alone, I’m giving it 4 Popcorn Munchin’ Pompadour Skulls… though if a slow pace and low production value are a deterrent for you, it gets a solid 3.