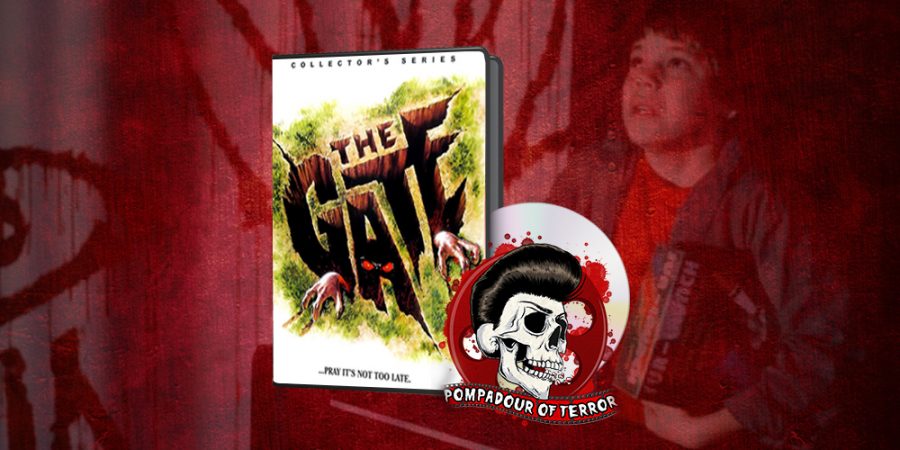 Now, here’s a bonafide classic. A treat for the eyes and a film comprised of truly terrifying images.

I’m talking about The Gate (1987)… a little Canadian-born, video store generation classic starring an unknown 13-year-old Stephen Dorff and directed by Tibor Takacs (I, Madman and the Rutger Hauer straight-to-video Redline). It resonated with me at the tender age of 10 and quickly became the sort of movie you’d rent over and over, record off Cinemax or watch every time it rotated back to USA Up All Night and Monster-Vision.

A staple of an era that made great films specifically for kids… without talking down to them. Films like The Monster Squad and The Goonies that gave the young characters real problems, chronicled important moments of growing up and, above all, posed real stakes. Like death. The gruesome kind.

The film is also a total time capsule. From the hair and clothes to the standard “having a party while your parents are gone” trope.  For fans of all things 80’s, it’s a real trip and a weird slice of total camp. It feels like someone gave a pre-teen boy 2.5 million dollars, a film crew and said “go make a movie!” But that’s what makes it fun, and also what makes it stand out from films of its era. Because while that sounds like a terrible idea, in this case it actually works.

Dorff plays Glen, your typical kid. Has a functional home life, a dorky best friend (Terry, played to perfection by Louis Tripp), and is totally enamored with NASA and rockets. He’s so into rockets in fact that there’s an early scene where Glen examines a scorched part of the roof where one of his model rockets almost burned down the house. For this, he’s been grounded under the yolk of his older sister Al (Christa Denton) while his parents are away for the weekend. It’s such a good piece of writing… it keeps the action inside a house. It gives the story (and budget) boundaries and propels the main characters to make their own fun out of boredom which proves to be deadly. Glen’s dad recently had an old tree torn down in the backyard, leaving a huge hole in the ground. And in true midnight movie fashion, this isn’t an ordinary hole, but a mouth into another world of terror. Even when the hole is filled in, it reopens itself. And who knows what’s on the other side… 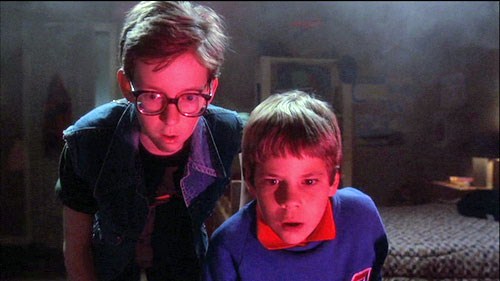 But the crux of this movie is its connection to an idea SO prevalent in the 80’s that it infected the very fiber of the culture: Heavy Metal as “Devil Music”. And this is where Terry comes in. Oh, Terry… easily one of my favorite characters in horror. He’s that kid… y’know, that kid everyone either knew (or was) in junior high. He’s withdrawn from normal society, a nerd of epic proportions and he finds his rebellious outlet through heavy metal. He’s got it all: total science dork, the “Killer Dwarves” patch covered denim jacket, the European metal albums (hard to come by in 1987) and the mindset of a true believer in all things occult. But he’s also a broken and kinda deeply fleshed out character. His mother recently died, his father is all but non-existent and he’s a weirdo because of it. He would probably be a very nice kid, but he’s been dealt a really crappy hand, and it makes you empathize with him. 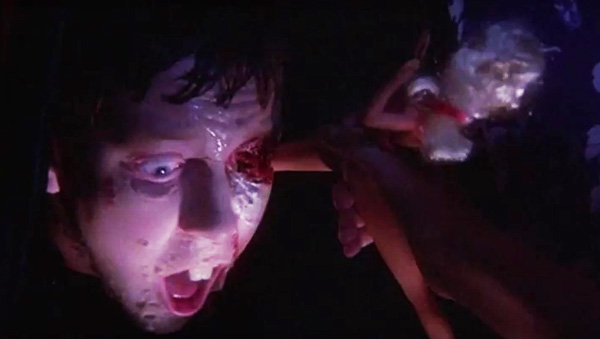 He explains to Glen that his favorite band Sacrifyx (RRAAWWWWR!) has an album wherein they explain that there is another world where monsters lie in wait just on the other side of our dimension. When the planets align and the sacrifices are made the gate is opened, and the “old gods” will return and take over the earth. The record even contains incantations to summon AND dispel the demons. How convenient!

A series of strange events – the breaking of a geode, Glen’s blood from a sliver, and his sister’s douchebag boyfriend burying the recently deceased family dog in the hole – create a domino effect that opens the gate and allows the creatures trickle through to wreak havoc on the kids. Now they are the only thing standing between the ultimate evil and the destruction of all mankind.

That should set up the story enough to get you interested. It’s a loose enough plot for a campy horror flick, but not so loose you’ll roll your eyes in disgust. What will keep you in your seat are the fantastic effects. And not just for the era… these things hold up pretty damned well today. In the age before digital monsters, FX wizards utilized prosthetics, blue screens, make-up, and trick photography to bring their visions to life.

At first, I was under the impression that the little demons (STILL really scary) were just well made claymation. But thanks to the work of a team of artists including Randall Cook – who would go on to be a part of Weta Workshop and work on LOTR – a bunch of guys in rubber suits being filmed and layered over and over in forced perspective would give the effects a level of strange realism that is captivating. It draws you right into the world they’re creating and it never lets up. Once the horror starts, it’s a roller coaster. Glen, Terry, Al and her two annoying twin friends the Lee sisters are trapped in the house when the first wave of demons comes through and brings their worst fears to life. 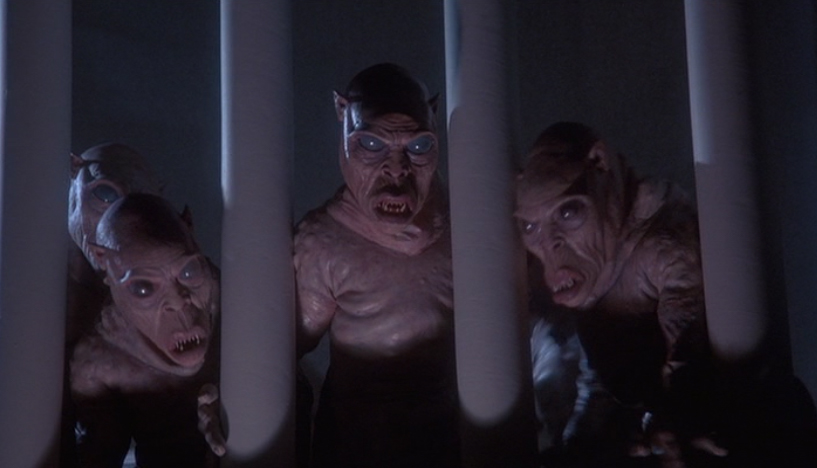 Let’s break it down:

…and to top it all off, one of the most imaginative and crazy looking demon kings EVER.

This isn’t just a good movie because I grew up with it. It hits all the high notes of a well-made cult classic. Plus it’s told from the perspective of a kid. Very much in the same vein as the Tobe Hooper version of Invaders from Mars, it sets a young child up to be the lone savior of the world and gives its viewers (mostly kids) a protagonist they can relate to. And say what you will about Dorff, he’s pretty good in this. While even he admits his debut film was “mostly just screaming” he pulls the character off well and you actually care if he succeeds in dispelling the evil that has risen from the hole in his backyard. This movie brings to life all the fantasies we had as children, the ones that make us the hero.

This flick has had a place in my heart since I was in elementary school and I think for true fans of cult classics and midnight movies, it’ll find a place in your heart too.

I’m gonna give it a STRONG 4.5 out of 5 Popcorn Munchin’ Pompadour Skulls. You gotta see it at least once in your life, if not 3 dozen times.

Streaming currently on Prime. Check it out.