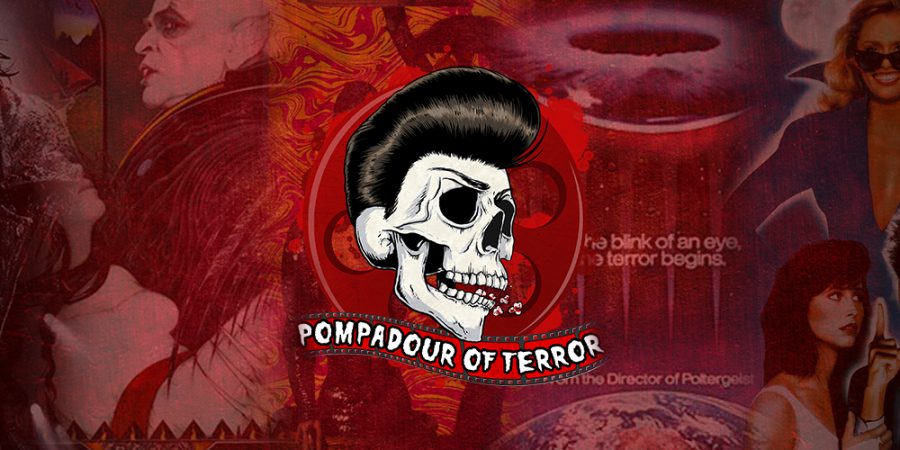 When I was a kid, I fell in love with vampires. The second horror movie I ever saw was the 1987 classic The Lost Boys. The characters were cool, fun, scary and vicious as hell. It set me down a path into a love for all things horror and I have vampires to thank for it.

In my decades of viewing, I’ve seen all the big ones from Underworld to Interview with the Vampire to the many incarnations of Dracula. But the ones that stuck with me always felt underrated. There’s a classical portrayal of the vampire that is hard to shake in conventional film, but every once in a while there’s a great take on the genre… and usually they go unnoticed or get buried under the sands of time.

But that’s why I’m here! BEHOLD…

Let’s start with one of my absolute favorites and not just favorite vampire films. It’s easily in my top 50 of all time. The same year that Joel Schumacher was scaring the shit out of teen audiences with the aforementioned The Lost Boys, a fairly unknown director teamed up with a young James Cameron fresh off the blockbuster Aliens. Before Kathryn Bigelow was winning Oscars, she was pushing the vampire genre in a direction few had ever gone. Armed with a James Cameron script about a transient “family” of vampires in rural Oklahoma who abduct a young man in their blood-soaked killing spree for survival, she made a film that truly jumps the shark. 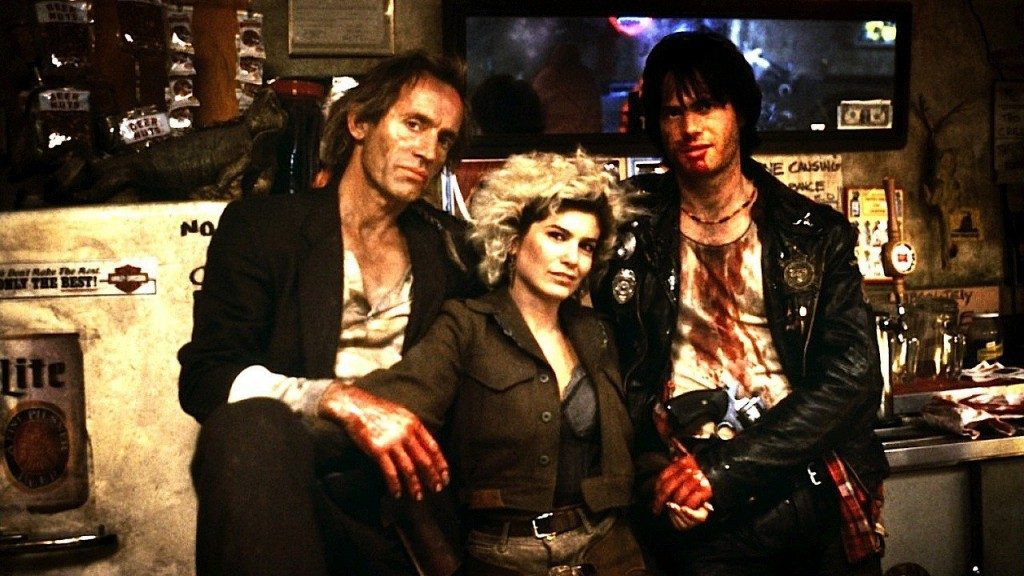 The cast alone is worth the price of admission. The family is comprised of Aliens alum Lance Henriksen, Jenette Goldstien and the absolute psychotic spectacle that is Bill Paxton (easily his best role EVER, behind Chet from Weird Science). Rounded out by Jenny Wright and cult fave Joshua Miller, the five of them travel around the southland in a blacked out van (so they can travel during the day and feed at night… SMART!). One night Wright comes across a young Adrian Pasdar (Heroes, S.H.I.E.L.D.) and even though she is just supposed to feed on him, she cannot help but fall in love with him instead. He becomes infected and has no choice but to travel with them and bear witness to the savage lives they lead. And finally, for all you movie store nerds, the cast is capped with the incomparable Tim Thomerson, as Pasdar’s father who is now searching for the people who kidnapped his son and later struggles to find a cure for his son’s affliction.

This movie is smart, original and a ton of fun to watch. I haul it out every Halloween season and at least one more time a year just for funsies. Highly recommended! Easily 5 Popcorn Munchin’ Pompadour Skulls!

Unfamiliar with the works of Werner Herzog or his relationship with Klaus Kinski, whose phenomenal acting is matched only by his immense insanity? Over the years, the two of them went down in film history with cult classics like Fitzcarraldo and Aguirre: The Wrath of God. In the late 70’s, they teamed up to put their own unique spin on F.W. Murnau’s timeless Nosferatu, the movie that changed how films were made and easily considered one of the granddaddies of modern horror. In their version, much like the original, the titular character (played as amazingly weird by Kinski as one would expect) travels from his home to another land spreading his plague of evil to everything he comes in contact with until his cold and dead heart becomes obsessed with a young woman that eventually leads to his demise. In their version, Kinski plays Dracula, a much more popularized character instead of the original film’s Graf Orlok. While it is a period piece, the sensibilities are definitely more modern for the era. It takes nothing away, but adds a very European horror vibe to the story. Shades of Italian horror and old Hammer films are present throughout and it comes off as very gritty and real.

The otherwise familiar and loose story is supported by legendary character actors Bruno Ganz, Roland Topor, Dan van Husen and the gorgeous Isabelle Adjani as Lucy Harker. While this movie is a bit slow it has a good build and for fans of that creepy Euro-vibe associated so much with horror in the 70’s and 80’s, it is a must see. I find that it gets outshined by many of the other films Herzog made in this period, but it takes a huge swing to remake such an important film which should be acknowledged. And if you like it, follow this one up with the equally forgotten, super-meta Shadow of the Vampire from 2000. Willem Dafoe does his best to channel the unadulterated crazy of Kinski and is complemented beautifully by John Malkovich who plays the actual director of the original film F.W, Murnau. Definitely check it out at least once, if not only for Kinski in that crazy-ass make up. 3.5 Popcorn Munchin’ Pompadour Skulls!

3. Lair of the White Worm

I’m just going to come out and say it. This movie is fuckin’ weird. Like really weird. Uncomfortably weird at times. But watchable all the same and definitely something any vampire fan should see. A strange skull is discovered and when it is unearthed, it awakens an evil force that preys upon the residents of a nearby town. Hugh Grant is as foppish as ever in his struggles against the demonic will of Amanda Donohoe in this trippy fang-fest that, while played in a relatively modern setting, feels older than it should. The story comes off as not the most engaging, but the reason you stay for this bad boy is because of the ambitious, psychedelic and often hilarious special effects. From the makeup to the sets to the CRAZY ASS video toaster techniques during a few dream-like sequences, there’s something for just about every fan of gonzo cinema. And I’m willing to give this movie the award for “longest vampire fangs ever.” 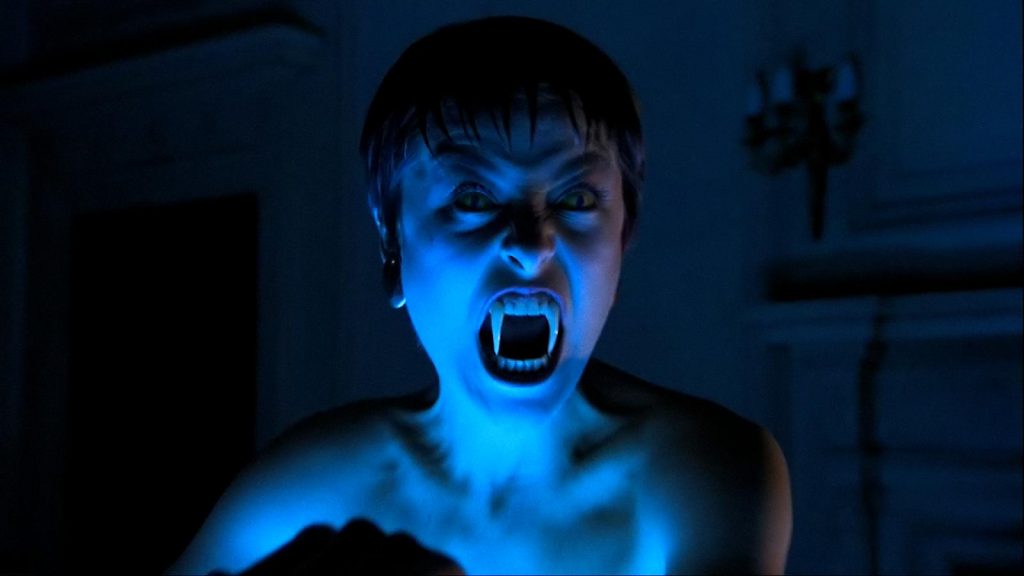 But to be fair, there are a lot of people who don’t consider this an “actual” vampire movie and I can see why. While it fits the bill of a fanged temptress preying on humans and virgins and stuff, it’s more in the realm of a demonic snake cult type thing. So, on the surface, totally a vampire film. But if your definition is more concise, you probably would not see it as such. I throw it into the fringe of the genre because it’s just a ton of fun and it’s worth seeing for all it’s weird glory at least once in your life. 4 Popcorn Munchin’ Pompadour Skulls!

Okay. Again… depending on your definition, you may not consider this a vampire movie. But it’s based on Colin Wilson’s book The Space Vampires and while it is not blood the villain craves but the intangible life energy in humans, this hits all the right marks when it comes to what a vampire truly is. This little gem, along with Invaders from Mars is part of Tobe Hooper’s series of throwback midnight movies. Basically it’s a modern version of a 1950’s B-movie with a ton of (at the time) cutting edge effects and A LOT less censorship… aka boobs. Lots and lots of shots of boobs, but moving on…

Steve Railsback portrays Col. Tom Carlsen, a member of a team of astronauts who are exploring Halley’s Comet. But what do they find when they investigate? A derelict spacecraft of alien origin filled with bat-like carcasses. They travel to its center only to find beautiful humanoid creatures encased in crystal coffins. Such a rare find… we have to bring them back to Earth! Of course you do.

The rest of the movie is exactly what you want from an old sci-fi or horror movie: A string of ever-growing ghastly murders, exploding desiccated corpses and an apocalypic light show in the streets of London with giant bat creatures and some of the most beautifully corny special effects of the 80’s. Add in a good dose of Patrick Stewart and you got yourself one hell of a fun movie. A lot of horror fans sleep on this thing because of how sci-fi it looks and it totally is sci-fi, but it blurs that line wonderfully and if you’ve been avoiding it or just haven’t gotten around to it, do yourself the biggest favor and check it out. 4.5 Popcorn Munchin’ Pompadour Skulls!

Now… I couldn’t end this list without throwing in AT LEAST one comedy. And it’s a dumb comedy to boot! It seems like some sort of rule that the vampire genre must be heavily littered with ultra-serious takes on the creature. But there are a few exceptions that stand out, and this is probably my favorite. A young and completely unknown Jim Carrey is a frustrated virgin teen (back when obvious 20-somethings played teenagers) who is bewitched by super-MILF Lauren Hutton, an ancient vampire who must feast on the blood of a virgin male’s inner thigh three times before Halloween to retain her beauty and remain ageless. Now if that’s not a plot just rife with hilarity, then I don’t know what is. 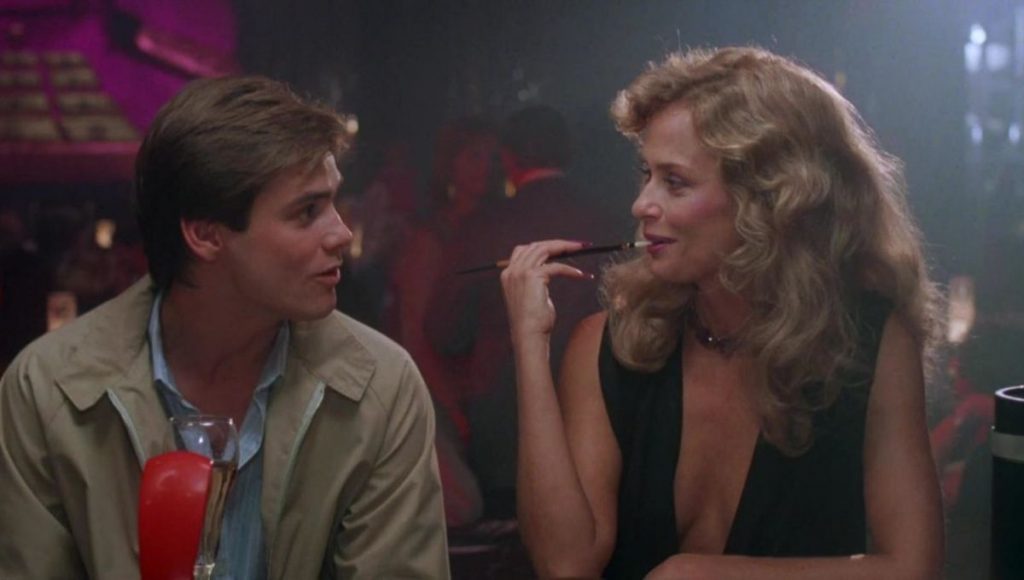 It’s a classic 80’s romp with all the common and borderline silly tropes: the prudish girlfriend, the dorky best friends, a slew of eye rolling double-entendre jokes and even a dance number. But what makes this movie so much fun is the lazy casual nature of it all, especially from the stellar performance of Cleavon Little as Hutton’s manservant. He’s catty and brash and funny as all hell. This was a staple of my childhood through basic cable and the occasional late night HBO or Showtime screening. It’s one of those accessible films you can just pick up at any point and have a good time. Whether you are a fan of Carrey or not, I still recommend it. As an early film in his career, it’s not plagued with al the goofy horse shit he became famous for. There are a few physical jokes but for the most part he plays it straight. He’s a good hapless victim of circumstance and while the remaining cast is forever on the acting B Team, they do their part and make the story a fun time capsule. Unless you grew up during the time when it was played on local stations and TNT ad nauseum, you’re probably drawing question marks. I totally recommend it to break up the seriousness of your Halloween viewing experience. And this way you don’t have to resort to the overrated mess that is Vampire’s Kiss. You’re welcome. 4.5 Popcorn Munchin’ Pompadour Skulls!

Have a spooky time out there, kids! And here’s to hoping you find that one house on your trick ‘r’ treating route that gives out the coveted full candy bars.