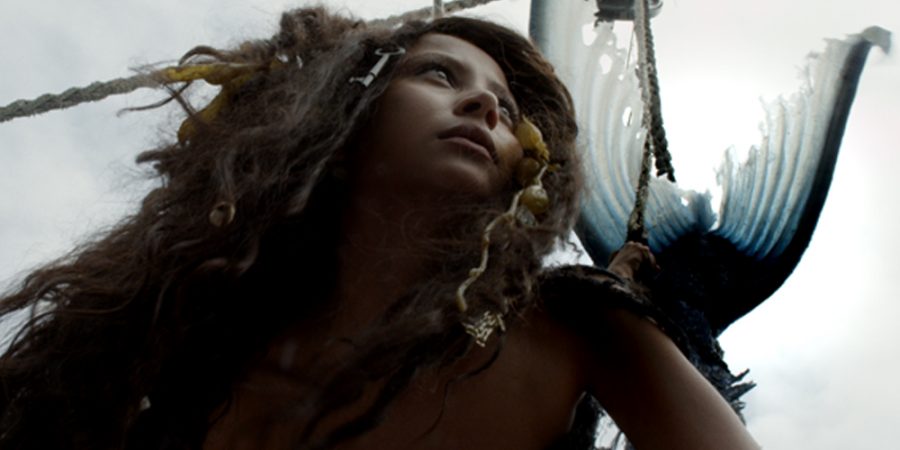 *This review contains some spoilers.*

Those were the exact words that came out of my mouth when I first learned of the concept to Mermaid Down back when the production was crowdfunding through Indiegogo.

At the time, I was a full-time university student with barely two nickels to rub together but after learning about Mermaid Down, it didn’t take me long to navigate online and make my pledge to the project.

Mermaid Down was explained as a horror revenge story about a mermaid whose tail is viciously removed. She is then thrown into a mental home with no one to believe that she’s an actual mermaid.

Created by Jeffrey Grellman and clinical psychologist Dr. Kelly Lauren Baker, the film is a metaphor for the treatment of our oceans and violence towards women. I was deep in conversations and debates about the treatment of aquatic animals with colleagues and strangers online, so this hooked me.

But am I still hooked?

The film begins with two fisherman discussing the mythological mermaid and they set out to catch a mermaid of their own. This endeavor didn’t come easily to the two of them. The younger of the two fisherman got what was coming to him. He was thrown overboard leaving the elder fisherman to subdue the mermaid on his own. Little did he know he wasn’t exactly…alone.

On a yacht just in the distance, Dr. Beyer (Burt Culver) witnesses the struggle between man and mermaid and with unknown intentions makes his way to the boat. At this point, the fisherman had brutally hacked and removed the mermaid’s but doesn’t live to tell the tale because in comes Dr. Beyer who sends him to sleep with the fishes. At first you want to rejoice in the quick karma, but then it’s clear Dr. Beyer is looking to bank on the situation and this mysterious woman.

Time passes and the mermaid ends up at the Beyer Psychiatric Facility for Women. Dr. Beyer uses the facility to keep her under close surveillance for research. When Dr. Beyer looks at the case file for “The New Girl”, we learn a cocoon formed where her tail once was and eventually yielded two human legs. Despite this new development, she’s unable to walk and is only mobile by means of a wheelchair.

There’s shared animosity between the girls at the facility towards each other but especially towards the newly admitted patient. This is short-lived as Dr. Beyer’s intentions and malicious acts become clear to them. The mermaid’s call to return to the ocean and the unfortunate loss of some of the characters along the way brings them closer together, sealing the film as a top-notch story of a sisterhood bond strengthened by adversities.

I feel obligated to mention there’s a ghost in this story. That means we’ve got one movie that fuses revenge, the paranormal, mythological creatures, and a killer who is an aggravating asshole. You do with that information as you will, but that personally appeals to my interests.

When I started the film, I realized it had been years since I backed this crowdfunding campaign. I unintentionally fell off track with their updates on how the production and release was going. That realization turned into concern that Mermaid Down would be, well…watered down with all of the mermaid films and shows that released over the last 5 years: Freeform’s Siren, Lisa Brühlmann’s Blue My Mind, and Agnieszka Smoczynska’s The Lure to name a few.

Thankfully, it was anything but watered down. If you’re wondering, yes I am still saying “Holy flippin’ fin f*ck!”

You can find Mermaid Down on Amazon Video, Redbox, and other VOD services. Give it a watch and let me know what you think by tweeting me at @thesuperghoul.