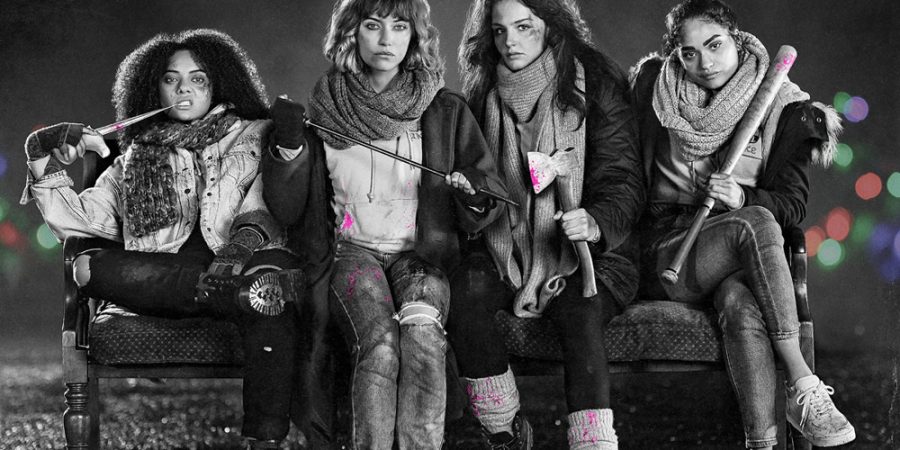 There is no sugarcoating in this review. Dare I even need to remind people that my opinions may differ from their own, it is begrudging yet necessary since there’s already been so much heat surrounding Black Christmas (2019).

The remake of the beloved 1974 Canadian film was written and directed by Sophia Takal and co-written by April Wolfe. What’s important to note is that this is a loose remake of Glen Morgan and Roy Moore’s Black Christmas and takes on a modern #MeToo narrative.

We’re first introduced to a sorority group getting into the swing of holiday festivities and merriment as Lindsay, played by Lucy Currey, is making her departure for winter break. She starts receiving messages from a profile that assumes the identity of Hawthorne College’s Founder Calvin Hawthorne. It’s a given that she is the first kill of the movie. That’s revealed in the trailer and a girl walking home alone at night in the first 10 minutes has blatant intention as fucked up as that is, but that’s part of the bigger picture.

The foundation of the movie really starts piecing together once principal characters Riley (Imogen Poots), Kris (Aleyse Shannon), and Marty (Lily Donoghue) make their way to the campus coffee shop and are deep in discussion about Hawthorne College’s founder. He’s a racist, a sexist, and a negative influence on male fraternity students and even faculty. Kris has made it her mission to de-weed the faculty body and campus of toxicity from college’s problematic history through a series of petitions.

With the film written and directed from a feminist scope, I got the impression Kris and Marty represent varying degrees of feminism. Kris is extremely vocal and unmoved and Marty is more reserved yet supportive of equal rights. On the other hand, Riley at the center is the meek type. Her moral values are synonymous with her friend group but she’s carrying trauma from a sexual assault some years back. That’s made known when a guy from AKO shows up and rudely informs them AKO fraternity president Brian Huntley (Ryan McIntyre) is back. Scratch out AKO fraternity president and replace it with Riley’s Rapist.

The problem is that nobody believed Riley, but for some unknown reason, Brian was asked to leave Hawthorne. The news of his return clearly weighs on Riley, but Kris is adamant that Riley doesn’t let it get to her.

That evening, Kris, Marty, Jesse (Brittany O’Grady) and Riley’s “Little” Helena (Madeleine Adams) are set to perform a holiday song at an AKO party. Riley is present to show support but ends up having to swap out places with Helena who needed to rest up after too many drinks. Right when Riley is supposed to bust out into song with her sorority sisters on stage, she spots Brian Huntley and freezes.

As his smug ass face burns away the shock and memories send Riley into a deep seethe, she takes control of the number by improvising lyrics throwing shade and calling out her rapist in the room. Just like this movie, the song yielded mixed reactions: cheers from mostly female party guests and booing from angry fraternity members.

The direct messages from Calvin Hawthorne become more aggressive following their performance. Riley, rightfully worried about her fellow sisters who didn’t make it home yet, heads to campus police to try and get help. Instead, she’s met with pushback; questions trying to diminish this red alert concern to nothing more than paranoia.

Fast forward, Riley learns from Professor Gelson (Cary Elwes) the video of their act the previous night was uploaded online and reaching high numbers in views. The larger the audience, the higher the probability of angry people and that was a concern rising in Riley.

She confronts Kris about this and this scene is fucking important for several reasons so get ready. 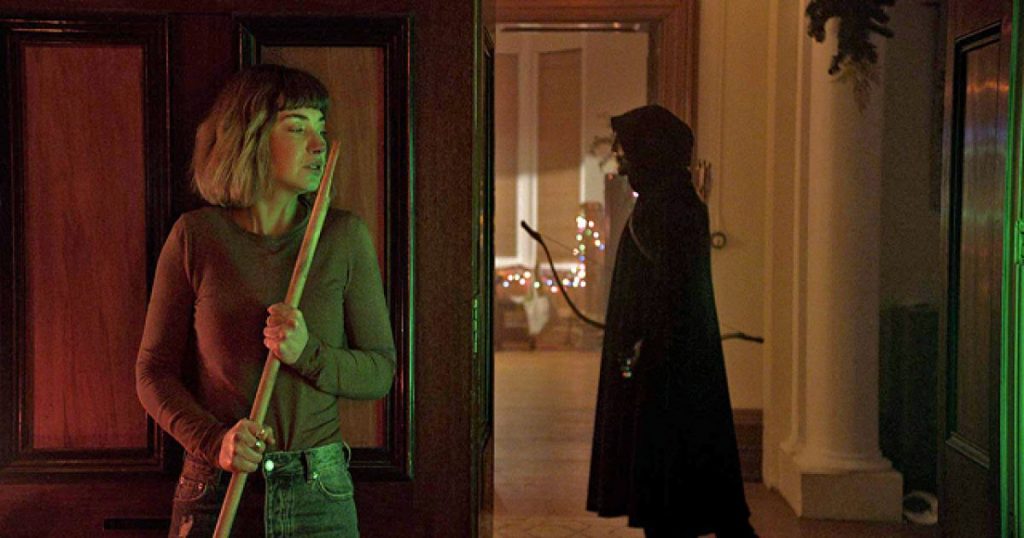 Shit hits the fan as cloaked and masked hunter fraternity bros show up to take them out one-by-one. This is where I started to struggle a bit because the supernatural element to the movie becomes known and we’re now concerned about Calvin Hawthorne’s bust being the source of toxic masculinity infused evil.

Sure, there was a glimpse of the bust having a tar-like substance coming out of its eyes in an earlier scene, but I wasn’t prepared for it to fully take on a supernatural direction granted human agency sparked it. After sitting on this struggle though, I discerned this facet of the story as an agent for the good guys. A number of these pledges were just as much a victim as the sorority girls being targeted, and while you won’t see us SJWs out there handing out cookies and trophies to genuinely good men, we do know you’re out there. Our focus though is on those who need to be held accountable.

Now that I’ve got that point out of the way, I ship Riley and Landon (Caleb Eberhardt) 100%. Landon, although a minor character, was impressionable and Caleb Eberhardt made him charming in a way that wasn’t overbearing. When he was on his way over to the MKE sorority house and runs into battle mode Riley, he observes the distress of her appearance and asks her what she needs him to do. To ask what do you need from me is so much more powerful than seizing the reigns and if Landon was on social media, I’d swipe right simply because of that moment of respect. 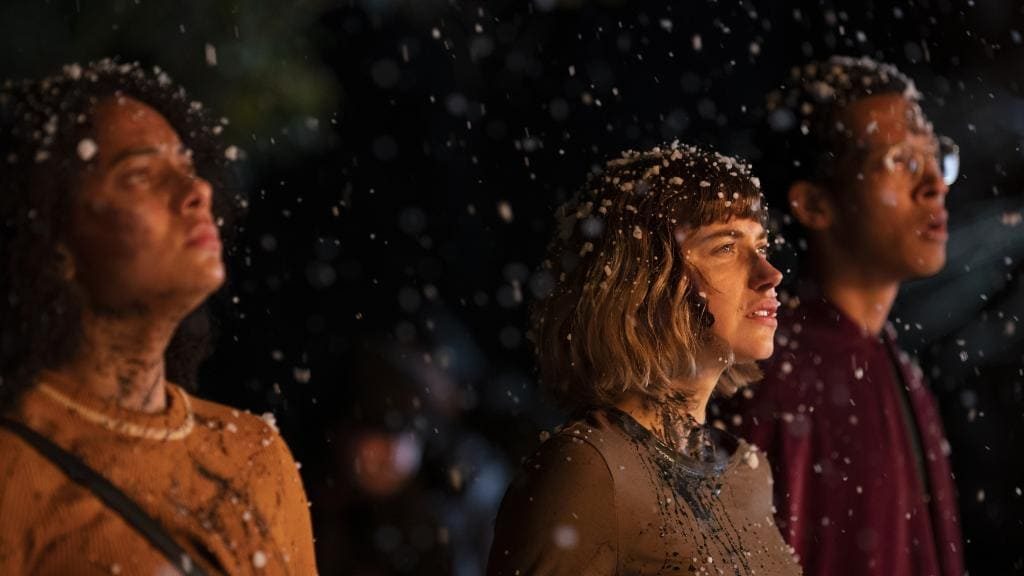 I digress and I have some final thoughts: There are minimal overlaps with Black Christmas (1974). If you walk into this movie expecting a direct homage to the original, you’re in for a world of disappointment. This iteration of Black Christmas though is entirely warranted. I implore you to approach your movie-watching experience with an open mind.

If you have no interest in seeing the movie, that’s cool. If you see the movie and don’t like it, that’s cool too. When you enter a discussion about the movie though, do not gatekeep or attempt to deter people from seeing a movie purely because of your love of the original movie. This film will speak to a number of people and it’s okay if you’re not part of that audience, but as a community, we need to be better about letting that drawbridge down.

Want to watch the original Black Christmas (1974)? Visit Shudder.com and get started with your 7-day free trial.

Black Christmas (2019), written and directed by Sophia Takal and co-written by April Wolfe, is now in theaters! Check out your local movie showtimes and get your tickets.