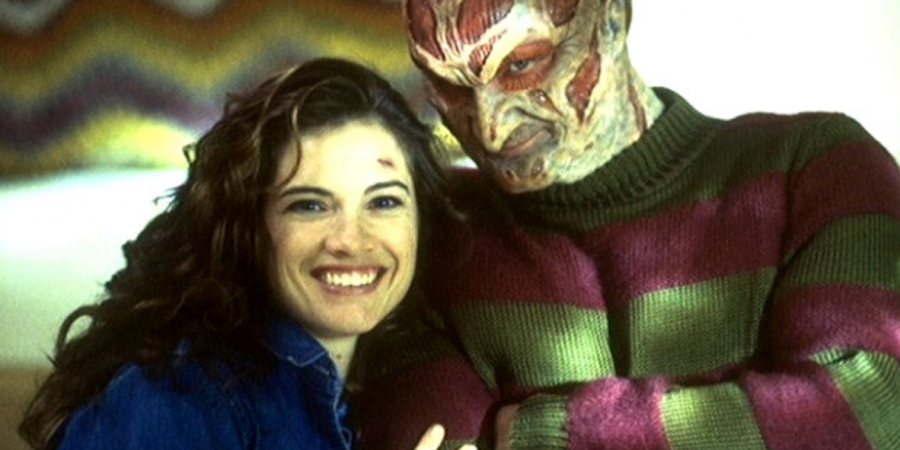 How are your new year’s resolutions coming? While some might have given up, I’m not because my 2020 resolution is hoping that this will be the year we find out what’s next in the world of A Nightmare on Elm Street.

With Wes Craven’s Estate regaining the rights to Freddy Krueger and A Nightmare on Elm Street and then taking pitches in 2019 (talk about being proactive), the Craven Estate isn’t sitting on this new opportunity. Maybe this year could be the year the news breaks that we’ll get a new feature film or series is in the works.

Per the law of anything Nightmare, the fans jumped on the opportunity to express their hopes Robert Englund would return. There are also demands for Heather Langenkamp go come back as Nancy. As a diehard, devout Nancy fan, this is what I’m hoping for.

I’m a big fan but by no means married to the two returning. However,  if there’s a possibility, I have a few ideas of how it could be done –  pros and cons included:

1. Back to the (Almost) Beginning

Probably the most controversial among Nightmare fans, but this would be in the same vein with 2018’s Halloween by making a direct sequel to the first film.

The film or show could follow what happened to Nancy all these years later. Did she end up in a psych ward? Did she get the heck out of Dodge and move on? Are her dreams calling her back? Fans may riot over the loss of some of their other favorites in the series. I can assure those fans that they can calm down as those other films will still be around, just in a different universe.

Pros:
1) No need to explain why Nancy has continued to get older as she never died.
2) Potentially a very interesting storyline providing fans and viewers showing how she’s matured.
3) Robert may be able to not be on screen as much, so it’s probably less physically demanding.

2. A Sequel to A Nightmare on Elm Street 5: The Dream Child

Some people really love Freddy’s Dead: The Final Nightmare (like me) and others can do without it. Being rarely a top favorite and a smidgen wild, this film could be sacrificed in favor of a continuation of the storyline from the previous films. Perhaps even following along the lines of Innovation’s Nightmares on Elm Street (1991-92) comic book series, which served as the official lead in to Freddy’s Dead and includes Nancy, Neil, the Dream Warriors, Alice, Jacob, Yvonne, etc. The series was intended to be an official lead-in to Freddy’s Dead.

According to this canon comic book series tie-in, following Nancy’s death in A Nightmare on Elm Street 3: Dream Warriors, Kristen was powerful enough to dream Nancy into the Beautiful Dream. Fans would have the chance to see Nancy and Alice finally cross paths and not only see the return of Robert and Heather but other actors from the franchise as well. In fact, it would be almost as big of a reunion as Never Sleep Again.

The aging of Nancy could be achieved in this scenario somewhat similar to that of season three of Twin Peaks and the aging of the characters trapped in the Black Lodge. Nancy is still alive within the Beautiful Dream but tied to reality in some way. Despite Kristen being powerful enough to dream her into the Beautiful Dream, Nancy was still put there by a human. Freddy can go on forever because he was given his privileges by demons.

Pros:
1) One heck of a movie overall that includes the return of so many fan-favorite characters and familiar faces, not just two.
2) Yay Dream Warriors, et al.
3) The epic story or at least a similar one to the Innovation Comics finally brought to life including Nancy and Alice together.

Cons:
1) This may be more physically demanding of Robert.
2) A little bit weird with some story stretching. Ah, but what the heck, so was Freddy’s Dead and that happened.
3) Easily dismissed by New Line Cinema/Warner Bros. due to potential budget forecasts.

The nightmare never died for our fictional Heather Langenkamp and she must once again face the demon that almost destroyed her family. Unlike the first New Nightmare, Heather now embraces Nancy and she has plenty more fan support to back her up thanks to a movement sparked by her documentary I AM NANCY.

I don’t see much of a film like this becoming possible. It might be too risky for the company although not entirely unlikely. But if you want to see a sequel, check out the upcoming fan film Dylan’s New Nightmare.

Pros:
1) Everyone gets to play themselves and not too much of Robert in the makeup.
2) Heather can return along with other stars.

Con:
1) This movie is risky and might now gain enough interest for the Craven Estate to get a return on investment.

No one really returns as their characters, except maybe Robert. New stories and familiar faces show up as different characters through cameos.

1) New, fresh faces can carry on the torch.

The small, quaint town of Springwood is rocked when kids disappear. Soon, things get worse them they finally show up…dead. The town panics as the killer, The Springwood Slasher, remains on the loose.

The Springwood Police are on the case with Sergeant Don Thompson at the helm. The story follows the turmoil, the search, and the effect the chaos has on Don and his family; how he and Marge split and how they ended up in the old Krueger house (see Freddy’s Dead). There’s drama, there’s mystery, there’s horror. It could be a film but would work better as a series, preferably lead by Mike Flanagan (Dr. Sleep, The Haunting of Hill House). And he’s up for the challenge.

The return of both Robert and Heather, as well as maybe some other faces, is exciting. It may require sacrifice, but if the final quality is good, it might be worth it. In any case, I’m too much of an A Nightmare on Elm Street fan to sacrifice quality for fan service. I have faith in the Craven Estate.

What do you think of the above suggestions?

What are some of your ideas?

Who do you hope is a part of the cast and/or crew?

Let us know in the comments!

A prior version of this article by Diandra can be found here.