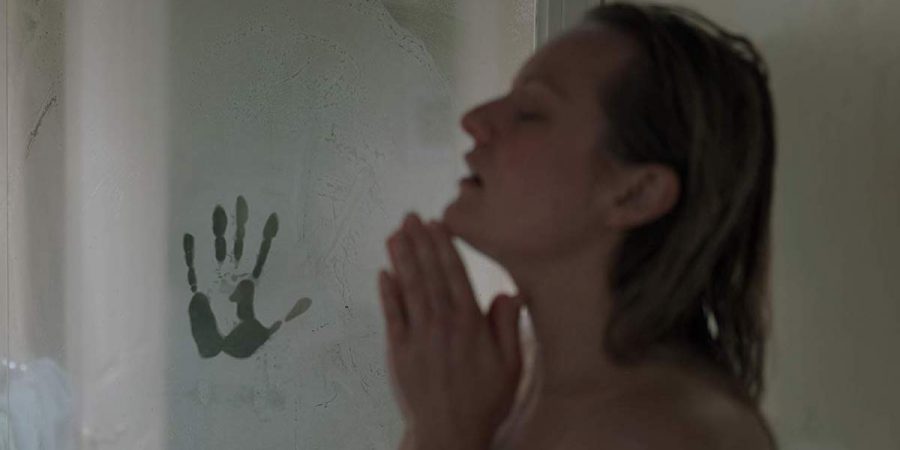 Being a trauma survivor who loves horror can sometimes be a tricky thing. The beauty of the genre is how it can help us escape our very real fears by looking at them through a different lens, or enable us to face them in a fictional manner that feels less tangible. Terror can be deeply empowering. It can also result in a three hour panic attack even when you do your best to prepare yourself.

The first five minutes of Leigh Whannell’s The Invisible Man paint a picture that many survivors recognize. More impressively, it conveys the sheer panic-stricken adrenaline of a moment for those who haven’t experienced it. There’s no question that she’s trying to escape a deeply traumatic situation. You hold your breath with Elisabeth Moss’ Cecilia until she makes it to her sister’s car. You let it out only to gasp at Adrian’s sudden and aggressive appearance.

That mood continues through the majority of the film. There are other twists and turns, as well as scares that we were warned about that’ll still make you jump. But I’d actually like to focus on the ending.

There have been comments – because of course there have been – about how Cecilia’s final action after being “meek” and “fragile” for the run of the film were unearned. Where did this brazen behavior come from? Why is she acting tough now? Why’s she strong all the sudden? Let’s pretend questions like that aren’t showing someone’s entire hindquarters and break it down.

First and foremost, Cecilia Kass is strong as hell from start to finish in The Invisible Man. You cannot possibly fathom the amount of strength it takes to leave an abuser half as terrifying as Adrian unless you’ve been in the situation yourself. And that’s without even considering the fact that she consistently told her loved ones the truth despite knowing it would make her sound insane. She knew full well that Adrian could continue to isolate her without her having to step foot back on his compound, and she did what needed to be done anyhow.

Let’s, just for a second, consider that perhaps Cecilia is weak (she’s not, please sit down). Let’s ignore the constant clear illustrations of strength in the face of terrible abuse and pretend that she didn’t have a “strong” moment until slitting Adrian’s throat at his dinner table with the help of his own technology. ‘Cause there’s still a very clear and logical explanation to her “out of the blue” actions.

By the time Cecilia takes action, the target of Adrian’s abuse has shifted. It’s no longer solely focused on her. She watched her sister be murdered in a crowded room; saw a child she loved be struck and emotionally tortured; and saw someone she loved get beaten to hell. Her shift isn’t weak to strong. Her shift is the concept of the abuse no longer beginning and ending with her own agony.

Being strong for yourself when you’ve been shown time and time again that you don’t matter? Damn near impossible (yet she still did, as a complete badass). Defending the only people who made you feel safe while experiencing your own personal hell? A cake walk in comparison.

The fact that most of her strength throughout the film was on display while her voice shook makes her more impressive, not less. You are welcome to dig up any of the countless Strong Female Character™ films if they’re more your speed though. Are her shoulders squared by the end? Yes. It’s over. May you never have to experience the fear that leads to such a freeing moment.

Most who have would kill to not look over our shoulders every day.

So, here’s to the Cecilia Kass’ of the world. To the survivors who are touted as “weak” by those lucky enough to not experience trauma themselves. Who are mocked for staying in a situation after the first hit connects or the first insult flies. To everyone who’s deemed “fragile” because they can’t imagine a world where they are free from their abuser.

You’re the biggest badasses on this earth, and I’m proud of every one of you.