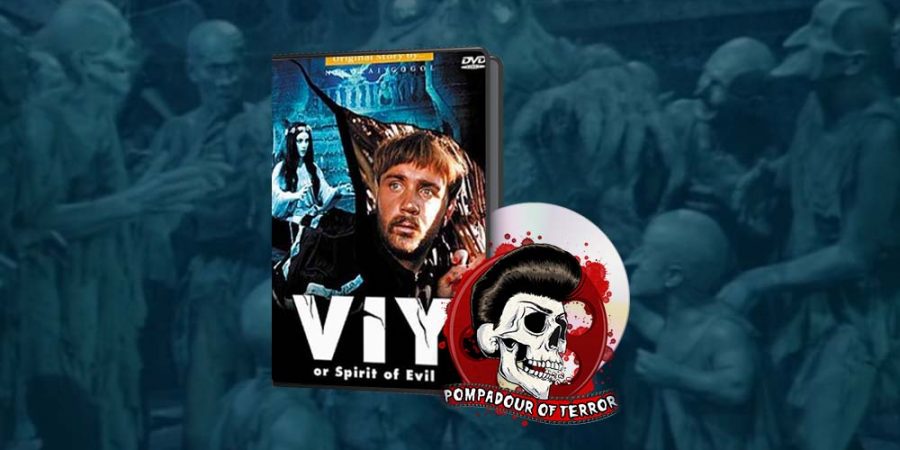 Every so often, I come across a film that is so groundbreaking that it feels like I found a huge piece in the puzzle of film history. A movie that influenced many of the techniques used in the movies we all know and love. One such film is the 1967 Russian classic Viy (pronounced “VEE”). I had never heard of this film…granted my tastes usually don’t precede the early ’70s, but when a friend sent me a link to the trailer I knew I had to check it out. I had seen it in the line up of films streaming on Shudder, but just never pulled that trigger. But I’m so glad that I did.

Co-directed by Konstantin Ershov and Georgiy Kropachyov, to say Viy is ahead of its time is an understatement. If you look at the effects-driven films of its era (the 50’s and 60’s), you can see how much they were pushing the boundaries in visual storytelling, camera work, and special effects and makeup. It is a treat for the eyes and a concentrated story that is captivating in its simplicity. The first horror film produced in Soviet Russia, it is a retelling of a traditional Ukrainian legend and it plays on the vibrant aesthetic of orthodox catholicism while simultaneously promoting the ideals of the communist regime and demonizing the cossacks of the old Czars.

A young monk-in-training (Khoma “the philosopher” – played by the enigmatic Leonid Kuravlyov) is not unlike the rest of his ilk. Cooped up for almost a year in the prison atmosphere of seminary school, he and his fellow students are released for a short break to roam the countryside. Apparently, young seminary students are real assholes. They steal food and linens from the townsfolk RIGHT as they are released from school (seriously?). They make goats seem like they are reading the bible (gasp!). And they get priests drunk and goad them into singing dozens of lurid songs (oh, the humanity!). Basically, they’re just rowdy kids who need to blow off some steam. So in the interest of this, the church sets them free for a short time to get it all out of their system so they can come back and to the grind of catholicism.

While Khoma wanders the countryside, he comes across a farm seeking lodging for the night. While in the barn, he is (sexually?) accosted by an extremely old crone. When he resists her “charms” she casts a spell that makes him stiff as a board. She then jumps onto his shoulders and rides him around the night sky. By now, he’s realized she’s a witch and, when they land, he beats her nearly to death with a stick. Just before strikes the final blow, the old crone transforms into a beautiful young woman. The whole situation has Khorma scared out of his mind, so he leaves her to die and hightails it back to his school. 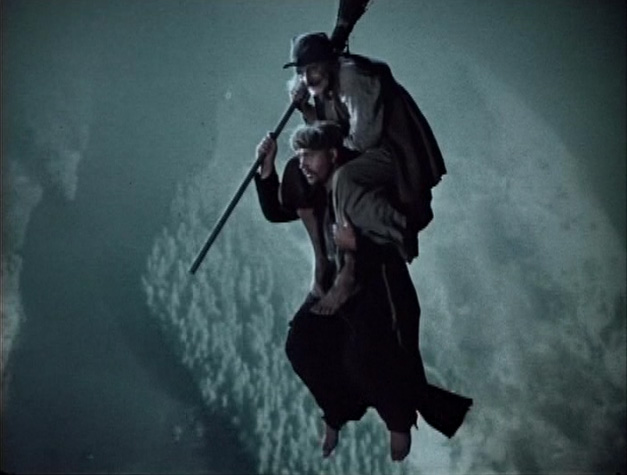 Dirty and frazzled from his night of terror, he is chastised by the head bishop for his wicked and wild behavior. To redeem himself, he is sent on a mission with a group of stout men to a farming community. There they have a young woman who is afflicted with what they can only guess is a curse, and he must bring the power of the church to fight the evil spirits. Unfortunately, because he and his compatriots stop for the night to get their drink on, the girl dies before they can reach town. But with her dying breath, she asks her father to have a monk named Khorma read her last rites. A strange request because she has seemingly never met him. As it turns out, the young lady in question resembles the form the witch took when Khoma almost beat her to death and now he must, as custom dictates, sit with the body in her family cathedral for three nights to read the last rites and send her soul to heaven. A trap laid by the witch… to get the man who rejected and then killed her confined to a room where she can exact her revenge. And while he is slowly driven mad with no one to believe his stories, Khoma cannot leave under punishment of death by 1000 lashes. A man trapped by convention, culture, and religion, he must do everything in his power to survive. Three nights of terror; she will call upon all the powers of hell to torment him and hopefully steal a monk’s soul for her master… the demon named VIY. 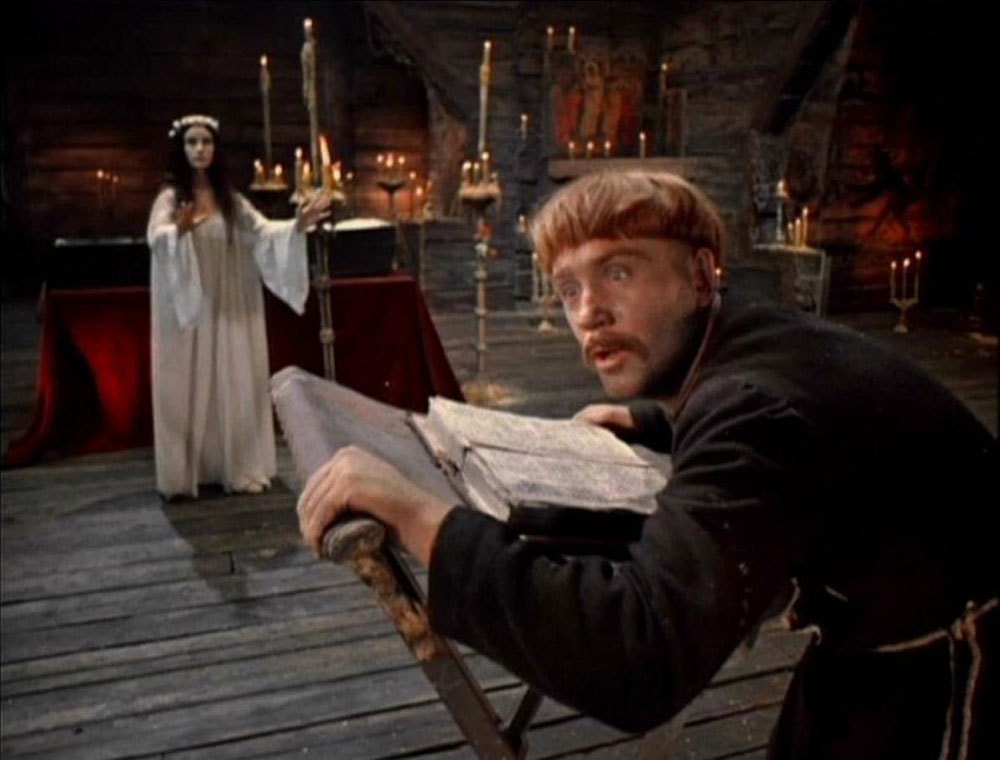 What unfolds here is a crazy ride of stunning camera work, bizarre effects and a range of surprisingly good to downright laughable makeup. The use of early rear-projector techniques is really utilized and pushed to the limits. While gratuitous at times, it actually fits the artistic feel of the movie with all its painted backdrops and borderline fluorescent color palette. The cinematography is weird and fun; an obvious influence on Sam Raimi (Evil Dead 1 & 2) and Nobuhiko Obayashi (Hausu) for its crazy angles, quick movements, and dizzying spins. It is a stark contrast from the scenes that take place during the day and is designed to put the viewer into the plagued mind of Khoma as he is besieged nightly. The sets are lush and take their art direction from the Russian orthodox aesthetic (dripping candles, dower sculptures, paintings of saints) mixed with traditional western horror motifs like cobwebs, coffins, and cold lighting. The storytelling is a mix of tongue-in-cheek comedy and effects that, while they may seem goofy by today’s standards, were more than likely terrifying for an audience in the late ’60s. Especially in Soviet Russia. And it also seems like it took a page from the Disney effects-driven films of the time period (Darby O’Gill, 20,000 Leagues, etc.) and precedes movies that really used most of these techniques (like Escape to Witch Mountain).

It all culminates in an amazingly wacky sequence on the third night of Khoma’s ordeal. The witch calls upon all the demons, succubi and creatures of hell to disturb and tempt the young monk into giving in, thus making his body and soul ripe for the taking. The final scene is absolutely worth the price of admission and while it does not go as far as Evil Dead or Hausu, you can definitely see how this was the impetus for that vein of filmmaking. 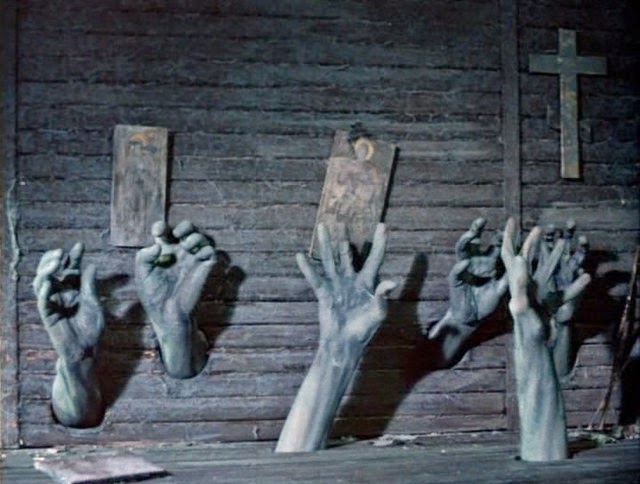 If you are a fan of obscure horror or just want to try something WAY off the beaten path, I highly recommend it. It’s short and sweet too; only 76 minutes and it’s streaming on Shudder.

This one gets 4 solid Popcorn-Munchin’ Pompadour Skulls for just the sets and camera work alone. If the final “demon” hadn’t been so laughable it may have gotten a higher rating… but what can you expect from the 1960’s communist Russia?!

Give this one a shot, weirdos! You won’t regret it.