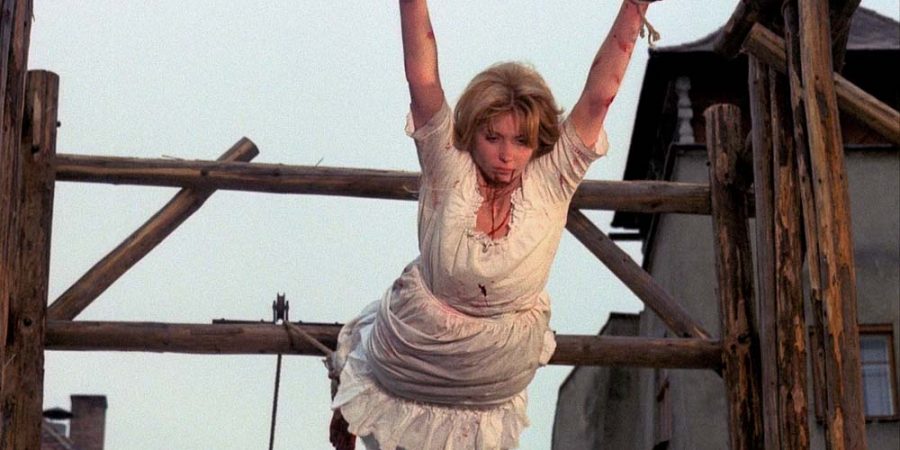 “In Europe, between the 15th and 19th centuries, it is estimated nearly eight million people were convicted of heresy and executed by fanatical witch hunters, in order to save their souls. Their deaths on the scaffold or the funeral pyre was, for them, the release from agonizing torture which had often lasted for years. This motion picture shows three cases taken from authentic documents from the time when witch-hunting had reached its peak and can only give a slight idea of the cruelties of one of the blackest pages in the history of Man.” 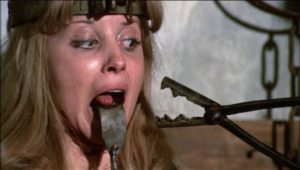 With this stark warning, Mark of the Devil draws a line in the sand and dares any viewer to cross it. The numbers are hyperbolized: Early English scholar Ronald Hutton (in his essay Counting the Witch Hunt) estimates the total number of European witch trials ending in actual execution to be about 12,000. But hyperbole is the name of the game for the West German horror film, both in content and in marketing. Fifty years after its initial release, Mark of the Devil stands tall as a shining example of how to shake the table with ultraviolence.

After a brief preamble with witch hunters roaming the countryside and raping nuns on trumped-up charges, the film opens with various accused standing before a bloodthirsty crowd. Their charges: sacrilege and fornication with the devil. Their punishment: humiliation, mutilation, and execution, all to sate the bloodlust of a few bad men and the masses that they whip into a frenzy. In just a few moments, the audience is privy to: the removal of four fingers from the right hand, tarring and feathering, and, for the women accused of devil-banging, a double burning at the stake. Such is the landscape in the rural village as Christian (Udo Kier) arrives. Christian is an apprentice witchfinder under the guidance of Lord Cumberland (Herbert Lom), who is looking to replace the current witchfinder, Albino (Reggie Nalder). Albino revels in sadism, administering accusations and whippings on a whim to make up for his sexual frustrations. Perhaps at one point, he had a righteous mandate, but it was lost long ago. After a barmaid (Olivera Katarina) spurns his advances, Albino accuses her of witchcraft and has his minion whip up an indictment. Christian steps in on her behalf, as he has fallen for the woman. The three men engage in a tug-of-war for power and justness while the bodies of innocents (mostly young women) suffer. 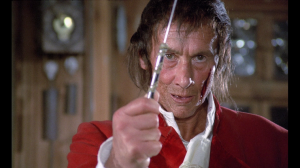 The film’s greatest asset isn’t its violence, though the shock-and-awe campaign walks nicely alongside the subversive message. Mark of the Devil’s power lies in its upended expectations. Albino’s villainy is clear early on in the film, thanks to Nalder’s disciplined performance. But all of the vile elements that exist in the witchfinder intensify exponentially in the sinister Lord Cumberland, who is merely better at disguising his warped terrorism under the guise of divine right: “We must never weaken in performing God’s work. For those who turn against our Savior, no punishment is sufficient.”

With Cumberland moving into the village, the townspeople move from the frying pan and into the fire. All of the injustice opens Christian’s eyes to the real viciousness of his mentor, and thus undermines his entire life’s mission. As such, Mark of the Devil is a counter-cultural showpiece that calls out crusaders for the dressed-up thugs that they are, using holy books and bombastic procedure to hide their corruption and depravity— far worse than any darkness they project onto the women who reject them.

The film is a series of martyrdom vignettes, loosely held together by a handful of power struggle plots. One witchfinder is quickly challenged by another, whose student falls for an accused witch and begins to question his master’s teachings. Amid it all, pincers rip out a woman’s tongue, nails drive into stomachs, racks stretch, torches burn feet, whips meet flesh, and wails fill the air in a salacious showcase of various torture devices. While it lacks the transgressive scrutiny of Pascal Laugier’s 2008 French Extreme film Martyrs, Devil is still far headier in its brutality than most splatter joints of the 1970s, with plenty to say as it cracks the whip.

The film’s earliest marketing efforts emphasized realism. A promotional ad in the German publication Stuttgarter Zeitung presents the brutal torture sequences as “…authentic episodes from the gruesome persecution of witches,”, and goes so far as to imply that there was no other way to show such atrocities: “…(the film) is unable to avoid depicting the witch hunters’ reign of terror realistically.” The only document that supports claims of “realism” comes, according to Andreas Ehrenreich? at Cine-Excess, via a fact sheet preserved by Deutsches Filminstitut Frankfurt, which was never mentioned again in press materials. This fact sheet credits a book entitled Geschichte der Hexenprozesse (History of the Witch Trials) by Soldan Heppe as a primary source for the screenplay.

The film’s introduction to American theaters was, as can be expected, a controversial one. The Arrow Blu-ray release of Mark of the Devil contains a fantastic featurette, Hallmark of the Devil, with Fangoria authority Michael Gingold; therein, he looks back at Hallmark Releasing’s campaign and affirms that once they got their hands on their new German import, Mark of the Devil became a textbook example in how to promote a movie with pure sensation and ballyhoo. Boasting “the most horrifying film ever made,” and a completely made-up rating of V for Violence, and—the cherry on top—a free vomit bag with the price of admission, the distributors carnival-barked their way to a successful box office return. The film outsold its spiritual predecessor Witchfinder General, thanks to its capitalization on the visceral elements of the film to sell tickets (a strategy that controversial films such as The Hunt still use today). As far as the suits were concerned, Mark of the Devil was a massive success.

It’s all fun until someone loses an eye; no one went blind from the Video Nasties craze a decade later, but many conservative crusaders in the United Kingdom lost their minds. Citing the usual “Won’t someone think of the children?” line, self-righteous parents and pundits joined forces against movies they deemed too dangerous to be seen. Over one hundred films landed in hot water, effectively banned by the British government. Mark of the Devil was originally passed for theatrical release in 1971 (with over three minutes of cuts to all torture sequences), but the uncut Intervision VHS release fell under the censorious eye of the British Board of Film Classification (BBFC), who ruled the film in violation of the Obscene Publications Act of 1959. The West German film, along with a whopping 81 other genre movies, were effectively banned by the Director of Public Prosecutions (DPP) under a lesser charge (Section 3 of the DPP list) that allowed the police to raid video shops and confiscate VHS tapes of said films. It wasn’t until 2014 that an uncut version got a physical release, through Arrow Films.

Mark of the Devil is currently streaming on Shudder (US).