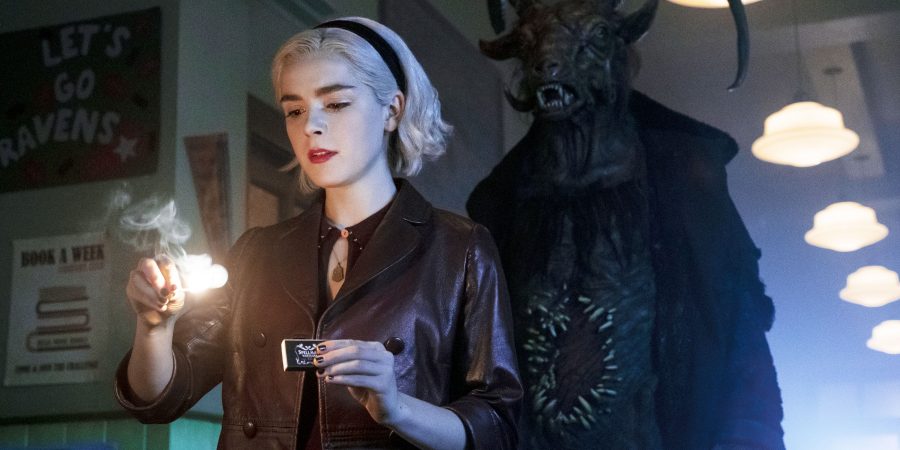 This post contains spoilers for Chilling Adventures of Sabrina.

Like all media that depicts witches and paganism, Chilling Adventures of Sabrina remains rooted in the fantastic. Unlike all the other media that depicts witches and paganism, the series uses its fantastic nature to achieve the closest depiction of modern witchcraft to date. It didn’t start that way, of course. Season one had plenty of rough patches, and season two still had its feet firmly planted in Satanism (albeit its function is to illustrate the witches realizing how damning their deity was). But then something curious happened in season three. The Church of Night stopped being the only acknowledged players on the board.

There are some folks who are probably wondering what the hell I’m talking about, so let me roll it back just a little bit. We’re going to start with witchcraft so far as Chilling Adventures of Sabrina is concerned. In ‘Brina’s world – so far as the first two seasons are concerned – all witches are of the Satan worshiping variety. We meet a couple outcasts from time to time, but each of them was excommunicated from the Church and got their power from Lucifer at one point or another.

Luci has a book, you sign your name in it, it pledges fealty, yada, yada. It’s all very male. So much so that I struggled a great deal with the show’s first season. The comics tell the story similarly, but with some key differences that made them infinitely more enjoyable than the show’s initial offering. Then season two rolls around and the witches realize that they’re being crushed under a patriarchy. There’s some great commentary in there, and season two was a vast improvement. But the witches as a whole still felt bland despite some very fun series regulars.

Now, here’s where things get fantastical for more reasons than the, you know, witches. The Pagans are depicted as the antagonists of season three. As one, some folks suspected that I’d be annoyed by this storyline, but nothing could be further from the truth. Not only were the Pagans depicted as fanatical devotees driven by blind faith, but they also forced The Church of Night to realize that they’re kind of the same and reach out to their exiled sisters.

As it happens, exploration of blind faith and witches being forced to come together in the face of adversity are very near the top of my list of favorite narratives to explore. Though the blind faith doesn’t get the attention it could, the series chooses to focus on something greater.

You may have guessed by now that the “something greater” and my thesis of it being the “closest depiction of modern witchcraft to date” have something to do with one another. You’d be right.

The Church of Night has to change its ways. The former Satanists can no longer survive on their own. They must move past their own internalized misogyny and, frankly, bigoted ways and accept what they don’t understand or what may not look like them. They find a new deity in Hecate (a delightful development for future seasons). But, more importantly, they find each other. Yes, I one hundred percent just pulled a “friends we made along the way” situation.

‘Cause here’s the thing. Modern day Pagans, or Wiccans, or whatever it is someone likes to call themselves, have a vast and varied set of beliefs. Many of us practice on our own, and it’s quite rare to find two solitary witches who believe the exact same thing. In the event there’s a coven involved, it’s usually quite small. As it turns out, mega churches have no place in religion regardless of the deity or book.

With our wide set of beliefs comes a large set of deities that we pray to. As a polytheistic faith, some even pray to multiple gods. And yes, some modern witches include Satan in those prayers.

What I’m saying here is that Pagans are a diverse group both in our beliefs and appearances. Seeing Chilling Adventures of Sabrina take that on this season wasn’t just a blast, it was also refreshing. Sabrina might remain the most exhausting character in her own show, but the series has grown into something so much more than just her narrative. (Also, the kid’s like 16. She’s allowed to be an idiot, even if she is utterly exhausting.)

Internalized misogyny is a hell of a drug. None of us are immune to it, regardless of gender, faith, or age. Watching smart, capable witches realize that even they can fall victim to it is an exceptional story to explore. More excitingly than all of that, we now get to see them explore it together!