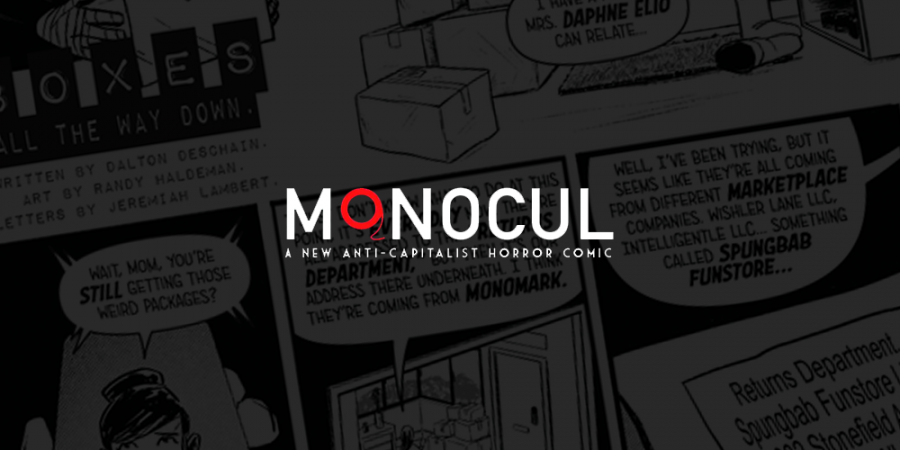 The big bad tech. They’re selling our data, listening to our conversations and playing God. Their cultures can be fiercely competitive and frankly, you don’t get to the top without bloodshed.

Our world revolves so heavily around these giants. They’re inescapable.

It’s scary stuff, which of course sets the stage for the perfect horror tale. Enter MONOCUL.

MONOCUL is a brand new anthology horror comic created and written by Dalton Deschain. According to Dalton’s Patreon:

“The series combines the pulpy blood and monsters of Tales From the Crypt with the same incisive take on modern tech companies as HBO’s Silicon Valley.  Every story revolves around a fictional tech mega-corporation called MONOCUL. Think Apple, Amazon, Google, etc.”

In every issue, Dalton takes readers on a journey “to every facet of their monolithic global presence and discover the hidden terrors that lurk beneath the surface.”

Dalton’s work is accompanied by beautiful illustrations by underground and upcoming comic artists who he pays — which we love to see!

Why did you choose to make Monocul? And why the tech direction, specifically around people instead of the tech itself?

MONOCUL is the accumulation of about 10 years of working in the tech world for one of those big, MONOCUL-sized corporations whose names have become part of our daily vocabulary.

I’ve always been a horror fan (as evidenced by my current pulp-horror-inspired punk band Dalton Deschain & the Traveling Show), and I’ve always been a comic book fan as well, and so one day while walking home from work I was ruminating on a particularly frustrating incident of byzantine corporate politics and thought that it would make for a good short horror comic. And I’m never one to just think of a good idea and let it sit, so instead I made it bigger and bigger in my head until it was a whole ongoing anthology series. Turns out I have a lot of thoughts about the industry I’ve worked in my whole life, and mostly they’re about how terrifying these companies are.

But it’s important to me to distinguish that I don’t think it’s the technology that’s scary. I don’t think there’s anything scary about technological advancement; what’s scary is how it’s used by the people in control of it, especially in the middle of the accelerating collapse of our late-stage capitalist society. In every MONOCUL story, I make sure that the big scary monster isn’t whatever tech product is on display, it’s MONOCUL itself.

Since you worked in the industry that MONOCUL is about, did you pull storylines and events from real experiences or exaggerations of reality? Are they projections of what these companies could do or become?

Some of the stories, like “Fearless” from our first volume, or our most recent story “Drained,” are very personal to me, and come directly from my experiences in the industry. A lot of other ones are based on online articles that I end up coming across as a result of being plugged into the tech world. For example, a recent story “Farm To Table” was based on an article I found about a cloning facility that was being built in China. It was this massive facility with the purpose of cloning up to one million cows per year in order to keep up with the country’s beef consumption. I decided to explore that idea from the perspective of one of the cows, anthropomorphized to look like a traditional farmhouse family.

When it comes to the corporate side of the comics, I try to keep things current and real. Projecting forward would ruin the immediacy of the comic’s message. I’m not trying to say “this is the scary thing these companies could turn into,” it’s “this is how scary they are right now.” The fantasy and exaggeration come into play as I introduce the horror tropes, whether it’s a mad scientist or a vampire retail manager. But the kernel of the story, the aspect of the industry that I’m commenting on, is always something from the present moment. That’s where I want the fear to spring from. 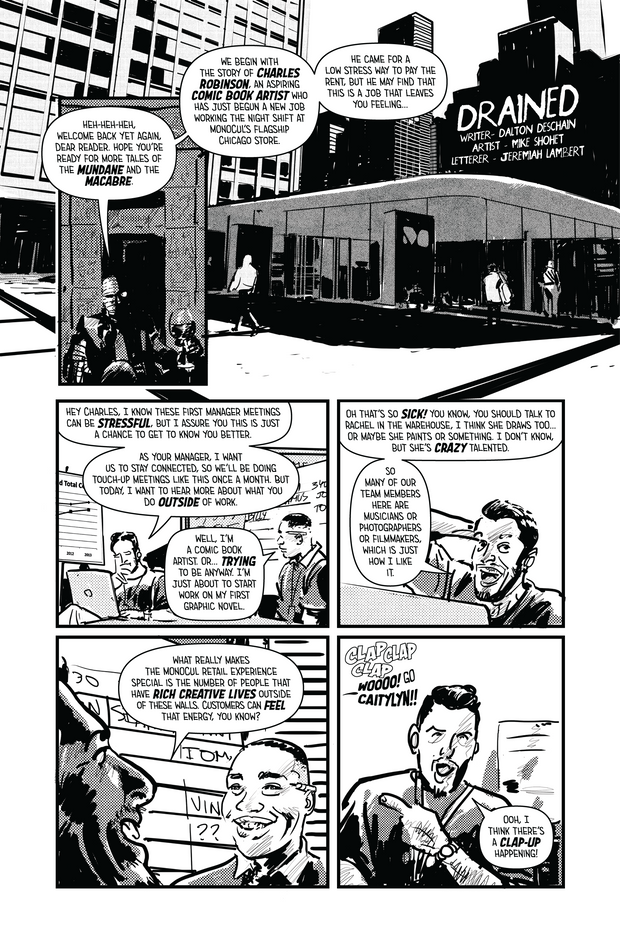 Why is it important for you to pay your artists?

It’s so important because why else would I expect them to put in the time and sweat and tears for me? Illustrating a comic book is hard, hard, hard, hard, hard work, and it takes so damn long. As a musician and writer who has put in long hours for no money in the past, I could never ask another creative person to go through that for me.

If there were only a single artist, it might be different. In that case, it might be a situation where we’re co-creating a book, partnering up to make something we’re passionate about, and hoping we end up making some money down the road. But because MONOCUL rotates artists for every story, I can’t expect anyone to have the same investment in it that I do. That means that right now I’m operating MONOCUL at a loss, but I’m hoping as the word spreads we’ll end up with enough Patreon supporters that I can at least break even every month.

How do you find your artists? If someone is interested in drawing for you, what’s a good way to reach you?

Luckily, the more I do MONOCUL, the easier it seems to be to find artists, and I think that’s just by virtue of building more connections in that world. For the most part, all the artists have either been people I know personally or more often they’re recommended to me by someone I know. I’ll look at their portfolio online, see if I think their style would be a good fit for the story, and then reach out and see if they’re interested.

In some cases, I’ve found artists on Twitter using different artist hashtags. In the case of this month’s issue, Farm To Table, the artist Jenna Miles found me on Twitter and asked if she could do a story. She had a very unique style that didn’t fit any ideas I was already developing, so I ended up coming up with a story specifically to fit what she drew. I’d like to do a lot more collaborations like that, where the artist tells me what they want to draw and then I fit a story to that. It pushes me as a writer into new and unexpected territory, which I love.

GET IN TOUCH: HOW TO ILLUSTRATE FOR MONOCUL

If anyone out there is interested in illustrating for MONOCUL, get in contact with Dalton at daltondeschain@gmail.com, or find him on Twitter or Instagram @daltondeschain. Send him examples of sequential artwork you’ve done and chances are you’ll end up working on MONOCUL.