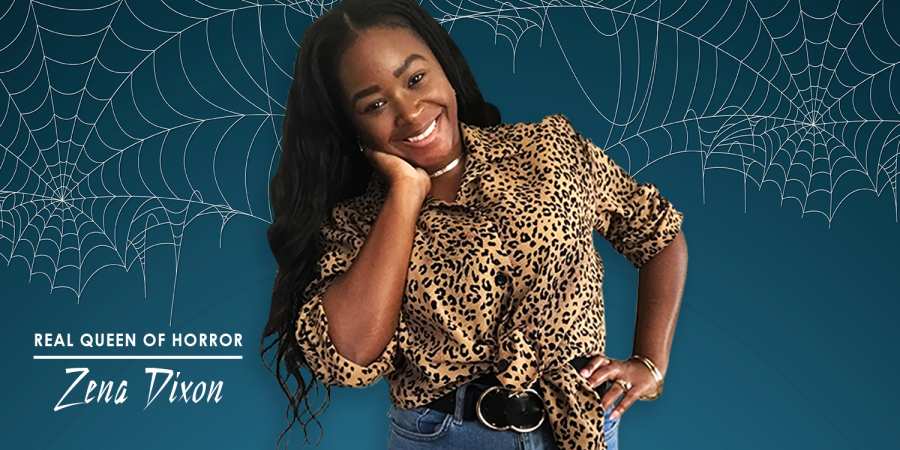 It’s no mystery the horror network introduces an abundance of talent and significant voices. You see your friends and colleagues share posts from creators on the regular, and sometimes through that avenue, you’re introduced to film festivals, podcasts, YouTube channels, etc. that would later become your favorites.

That’s how I was first introduced to writer and filmmaker Zena S. Dixon, the Real Queen of Horror. With a website and YouTube channel and a continuously growing following, Zena creates consistent, quality video content that focuses on fresh topics. Some examples include Board Games Gone Wrong in Movies and Top Snitching Zombies, and every single one is infused with her warm and lively personality.

When asked about the start and evolution of her YouTube journey, Zena shared, “Originally, I started my YouTube channel in 2010. My previous videos were mainly movie reviews with a twist. Then, I relaunched and created a new channel in 2013, however, seven years later I decided to relaunch once again! Over the years, the growth has been there but I noticed when I relaunched earlier this year, the growth has been pouring in. I believe this is because I’m way more organized, and I stick to my schedule.”

Zena’s love and passion for horror goes back to before she hit her double digits. She recalls an experience at four years old watching Kevin S. Tenney’s supernatural Night of the Demons (1988) with her family that launched her into the world of horror.

“Have you ever been hyped by a movie’s title sequence? If you haven’t, please watch Night of the Demons! The opening title sequence is animated with graveyards, ghosts, skeleton creatures, spiral dark clouds…Seriously, gives me all the Halloween nostalgia from my childhood! And don’t get me started on the music or the characters. Of course, I was scared out of my mind after watching it. I remember not being able to go to the bathroom alone for weeks! But as frightened as I was, I couldn’t get enough of it. From then on, I wanted more horror movies and series in my life.”

She made it so. Zena has been successful in living a life that breathes horror. Just this week, Zena was announced as a special guest juror for Women in Horror Film Festival 2021 and on October 10, 2020 at 6 PM PT, Zena is leading the Museum of Pop Culture’s (MoPOP) virtual viewing of Attack the Block with a discussion to follow.

While different niche communities have embraced Zena and her brand Real Queen of Horror, Zena has shed some light on some of the challenges she faced in the past in an unplanned video on her channel. Back in June, those connected with her on social networks and those subscribed to her channel tuned into a newly published video titled Being Enough in the Horror Industry. In the video, Zena details her grievances with a biased industry that doesn’t give room for even those most qualified.

Zena reflected on the video, stating, “To be honest, I decided to film the video on a whim. It was not a part of my video schedule, and I’m very serious about my schedule. At the end of 2019, I mapped out all of the video topics I wanted to film from Jan 2020 to Dec 2020. I filmed the video as if I was talking to a five-year-old Zena, who would watch horror movies every Friday night with her feet hanging off the bed. Her little eyes glued to the screen.”

For YouTube creators, there’s no way to know how your audience is going to receive and react to the next upload. In the case of Being Enough in the Horror Industry, Zena received praise and support from countless individuals with a mutual love of horror.

“The support has been amazing,” Zena expressed. “I wasn’t too sure how anyone would have responded to this video, and I didn’t imagine it would have touched so many people.”

I think many would agree that horror fans – in various circles and networks – tap into a level of empathy and understanding that’s hard to hold a candle to. Viewers showed up with overwhelming support, but they also received reassurance from Zena and her video that they, too, are enough.

Zena shared, “My intention for the video was meant for young genre fans like five-year-old Zena. I want them to keep that passion and enthusiasm for what they love, regardless of what anyone thinks. I want them to know, as cliche as this sounds, no matter how unreachable your dreams may seem, keep them. If you always possess self-worth, you’ll always have your passion. And please, truly know, your voice matters.”

A huge thank you to Zena, the Real Queen of Horror, for not only the interview but for opening up a discussion that needs to happen.

You can find Zena’s work on her site RealQueenofHorror.com and her YouTube channel. If you want to get better acquainted with her work, Zena’s short film SHE is available on Vimeo and her column Zena’s Period Blood can be read at DreadCentral.com. Follow Zena on Social Media: Twitter | Instagram | Facebook

Waaaaaiiiit… Did you think we were done here?

If you haven’t checked out Zena’s YouTube channel yet, here are three of The Superghoul’s favorites you should check out!

#2: Most Expensive Homes in Horror

After you check out Zena’s channel, let us know in a comment which is your favorite so far, because trust me when I say…there will be more!